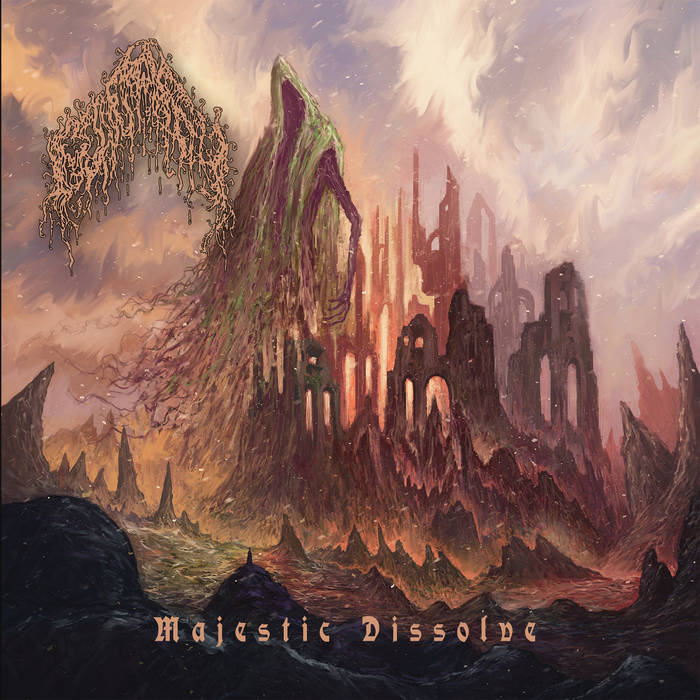 Modern death metal seems to have split itself into two main camps over the past decade. Following the left-hand path, we have the plethora of bands exhausting the already scarce supply of HM-2 pedals and rehashing the collected works of the Stockholm scene circa 1989. On the other side, spearheaded by Portal, Ulcerate and any number of admittedly excellent underground bands, we have the bands who emphasize atmosphere and aural terror over such old-fashioned notions such as riffs, combining murky dissonance with cavernous production in a way that occasionally serves to hide the limitations of the lesser bands of this persuasion in an impenetrable miasma of mystery and intrigue.

Strangely, given its contemporaneous and enduring popularity, there are relatively few bands that actively seek to utilize and develop the sound of classic early 90s death metal, when Death, Deicide and Morbid Angel brought the sub-genre to a prominence in the metal scene that has never really diminished, despite the continuing splintering of heavy music into ever more convoluted subsets and the infinite possibilities offered by the fusion of non-metallic elements with the primary existing forms of metal. Not unlike Hexorcist’s excellent "Evil Reaping Death" release from earlier this year, it is therefore joy unbound, when this listener claps his ears around a new record that, without simply representing a simple reworking of times gone by, takes riff-based death metal of the old-school, and re-tools it in a way that works perfectly in the context of the current extreme music scene.

Resplendent in excellent Mark Erskine sleeve-art, Majestic Dissolve starts brilliantly, with the pulverizing death metal of ‘Wet Flesh Vortex’, which raises expectations sky-high thanks to its dynamic blend of crunchy mid-tempo chugging and whirlwind fret-melting chaos. In the succession of 3-minute ragers that follow, chromatic tremolo flurries assault the unsuspecting listener from unexpected angles, with anyone left alive permanently floored by their combination with a barrage of barreling grooves, together with stop-start cadences that showcase the technical ability of guitarists Ian Mann and Wayne Sarantopolous, but without ever tempering the primitive thrill of their unrestrained death metal madness. Conjureth impress with the breadth of their attack, careening into the supercharged thrash of ‘Mutilated Spirits’ with the same ease with which they unfurl the labyrinthine melodies of the superb ‘An Occult Mosaic’, and it all sounds utterly natural. In contrast to some of their peers, obsessively hammering away at their low E-strings as if they will eventually give up their secrets if tortured with sufficient violence, they also utilize the entire fretboard, deploying snaking riffs and sizzling guitar figures which jump acrobatically across higher and lower registers, enhancing the brutality of the Deicide-like tremolo runs that form the basis of the majority of the tracks on the album.

If there is any criticism to be levelled at Conjureth, it is that Majestic Dissolve would have a modicum of additional staying power were they able to turn their obvious talents towards the composition of a small number of musical or vocal hooks that would outlast the duration of the track, but one feels that this progression is likely to come by the time they follow their debut.

Overall, though, the album is a highly promising effort that evokes the memories of the masters, but without feeling retrogressive or old-fashioned, and marks out Conjureth as a name to keep a close eye on in the future.

Set for an October 10th, 2021 release Conjureth answer the darkness with their debut full length album Majestic Dissolve. How can one best describe or summarize this album; let’s say bulldozing for a start. DM has always had an overpowering aura about it but there's something about Majestic Dissolve that sounds like you're being bullied or shoved into a corner by a 7-foot, 370-pound, cardiovascular freak of nature. Energetic is but an understatement on Majestic Dissolve, you have to question the stamina and momentum of the guys behind this record simply due to the inhuman, animal-esque, fatigue level demonstrated on Majestic Dissolve. Not forgetting the guitar solos that add significant depth and contrast to the record.

It’s hard to not appreciate the music you're given on here. It’s pretty much DM in a nutshell minus the filler. Tight in some ways yet expansive in others. Brutalizing with the drums, yet almost serene and transcendental with the solos that leave you stuck a gaze. 'Wet Flesh Vortex' is where it all begins when that 90s guitar solo creeps in way towards the end to close things off and segue into 'Possession Psychosis'. It nearly makes you feel as though listening to a fusion of Death, Nile, Dead Congregation and early Morbid Angel the way its structured and the production behind it. These riffs are cool and hit the mark the band seems to have been aiming for in terms of the atmosphere they wanted to conjure on Majestic Dissolve.

Short bursts of syncopation are fused with the dynamic vocals on songs such as ‘Resintegrate’ and ‘A Terror Sacrifice’ that again keeps the album sounding interesting rather than rehashing the same old formula. Also admire the way these songs start, baring no intro except for the first track ‘Wet Flesh Vortex’ (from what I can recall). Its straight into the metal from the first note.

Composed with a sense of technicality, heaviness and elegance, Majestic Dissolve stirs a sonic soup of rhythms and serves it to the listener as they advocate for old OSDM. The music sort of embodies the cryptic cover art of the album that while evincing an enigmatic aura, rubs shoulders with the romantic through its picturesque and vast layout. And the songs on the album embody exactly those attributes as you'd hear the soothing solos weave into the punishing thump of the drumming as per say on a song like 'Sorcery Arts' or the thrash attack that is 'An Occult Mosaic'. These entries and the likes of share an important aspect and that is identity. You can't see yourself feeling bored at any moment during the runtime of Majestic Dissolve. Each song has its mark. Blasts to have your head falling off, vocals that'd make you whip out an umbrella and riffs snatched straight out of the 90s DM playbook. What's not to love?

All in all, Majestic Dissolve takes you on a torturous, yet lucid and sublime DM trip that would make you wish it were not over this soon. Also check out the solo on 'The Unworshipped'. "Whose gonna steal the show, baby it’s the guitar man"