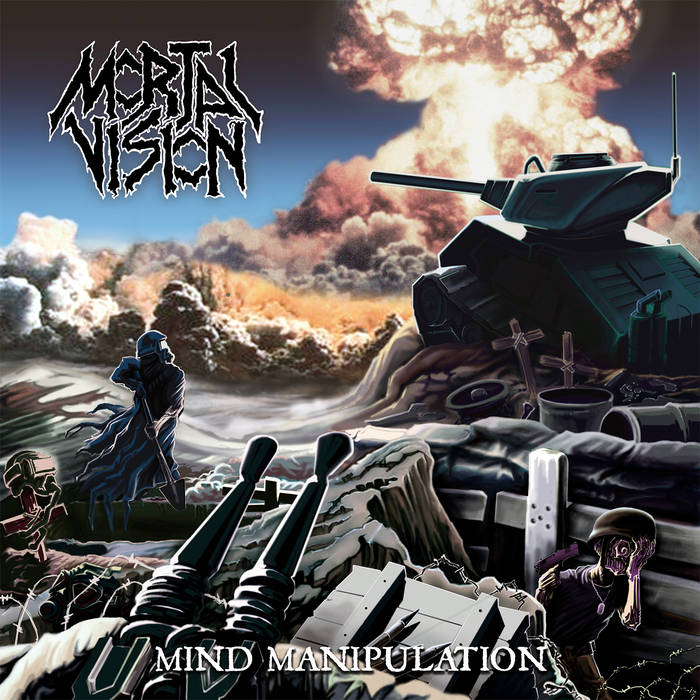 If you want to be politically respected in my country, you cannot ignore the whore called zeitgeist. That’s why more or less all politicians babble the whole day long about the climate change. Honestly speaking, I thought that they over-emphasize this topic. But as if so often the case, I was wrong. Now I have learned that the Ukraine, once a region with severe winters and comparatively warm summers, has turned into a jungle. The transformation process took just 33 minutes. Welcome to Mind Manipulation.

The quartet called Mortal Vision swings an iron axe which was forged in a house with the name Cavalera on the nameplate. Many riffs “arise” and none of them can hide the love of its creators for the once great South American flagship. The breaks, the phrasing of the vocals and even the solos do not leave any doubts. Therefore, it is only logical that the sharp, pure and sometimes apocalyptic atmosphere of Sepultura’s third and fourth full-length jumps out of its grave. Given this, everybody can feel free to avoid this album due to its obvious influence and the fact that it sounds pretty one-dimensional. However, to do so would be a fatal mistake, because Mind Manipulation kicks you massively in the pit of the stomach.

Mortal Vision thrash with a maximum of energy. Their spirit reminds me of Danish hordes like Killing or Battery. Despite their inspiration from the late eighties / early nineties, everything sounds new and intoxicating. This fresh breeze is combined with a surprisingly mature songwriting. The sawing guitars are never an end it itself. They shape coherent tunes that do not suffer from unnecessary ingredients. Instead, everything is offered in pure and clean contours. The riff massacres characterize the material, but surprising, short melody fragments like the alarming one at the beginning of 'Condemned To Death' also show up occasionally. Maybe Schmier from Destruction is in search of his once amazing energy level – now he knows who has taken possession of it. By the way, 'Possessed' is another mix of straight riffing, mega-heavy mid-tempo thunderclaps, high velocity, defiant melodies and an inspired solo. Too bad that the solid yet somewhat colorless vocals leave room for optimization. Nevertheless, this is an “Exumer in ecstasy” trip that makes a lot of good feelings.

Consequently, it’s not fair that only 500 copies (where can I buy one?) of this debut were produced. I am sure that this form of restless, dynamic thrash metal deserves more attention. But this is just the start for Mortal Vision. Surely, the best is yet to come as soon as they emancipate themselves from their Cavalerian leitmotif. I believe in the power, the stamina and the creativity of the band. Better still, now I also believe in the necessity to fight against the climate change. Or have I only fallen victim to a Mind Manipulation?