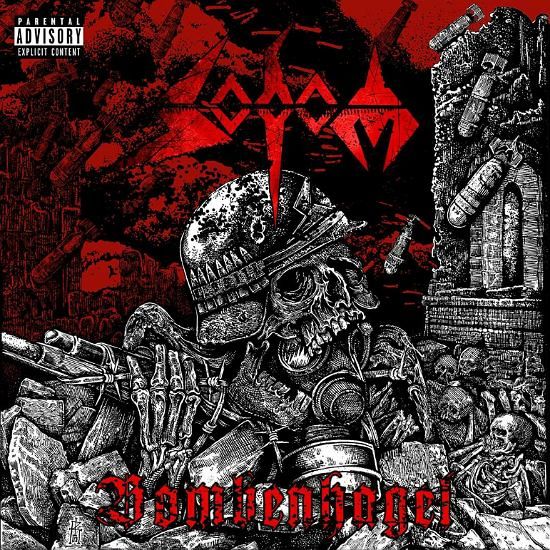 Since Germany always starts its journey home quite early at football tournaments, you hardly ever hear the Teutonic national anthem anymore. This was obviously reason enough for Tom Angelripper to present it again. Welcome to the new version of Bombenhagel.

To be honest, this song has never been one of my Sodom favorites. (On the other hand, I am happy they did not rediscover 'Sodomy And Lust', because you cannot make a perfect thing better.) The title track is alright, but the world wouldn't be worse without the new version than before. The classic with the both primitive and catchy main riff is one minute longer than before, there are other known melodies besides the German anthem and Harris Johns was allowed to play a solo. That doesn't sound all that exciting? Actually it is not.

But there are two more pieces. That's relatively few, right? Well, Sodom have discovered their love for the EP format for quite some time and two good tracks are better than ten mediocre ones. Still, it remains a short pleasure. 'Coup De Grace' and the somewhat dark 'Pestiferous Posse' are fun and partly sound like leftovers from the black thrash stone age. Thereby 'Pestiferous Posse' has more substance and processing to offer. But like the other track it is characterized especially by its straightforwardness despite its mid-tempo part and the surprising ending.'Coup De Grace' seems somewhat relatively one-dimensional in comparison. It offers solid Sodom material, but an arc of tension is missing. In this respect I would be surprised if this track would make it into the band's live set - already the better closer will have problems in view of the earlier approximately 1,904 Sodom songs.

In any case, the framework of the EP is correct. The production is "typical Sodom", neither as modern-sterile as Destruction nor as lifeless and overproduced as Kreator. Moreover, the artwork makes clear, as already with Sacred Warpath or Partisan, that Angelripper absolutely wants to press the bench again in the old school. Since Blackfire sits next to him again, both write off each other. The result is not bad, but not outstanding this time either. However, it's much better than the last efforts of the German football team.