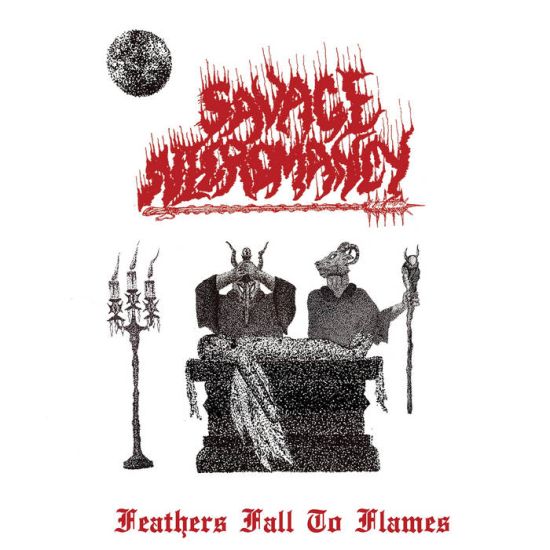 Everything about this band has you expecting war metal in the vein of acts like Barbaric Horde, Diocletian or Blood Chalice, but after listening to this, I was surprised (and honestly, at first a tad disappointed) to find that things are a little more nuanced in the Savage Necromancy universe. Not a lot, but compared to the acts mentioned before, they are. And after a second listen I realized that that is what makes this album stand out among its peers.

Their sound is a combination of primitive black/death metal like Archgoat and Profanatica with some Conqueror sprinkled on top on one side, and black/thrash like Nifelheim, old Sodom and traces of Hellhammer injected on the other. The band alternates between pummeling slower primitivism and fast chaotic pummeling rage, establishing themselves clearly in the black/death end of the spectrum. The thing that sets them apart though, is their thrash infused riffing, that goes beyond the tremelo-picked savagery of the bestial black genre, with some awesome guitar leads added. At times they have me thinking of early Sodom and Kreator getting into a knife fight with Sarcofago and Holocausto, while Impaled Nazarene shouts abuse at all of them, but seen through a Blasphemy-meets-Archgoat lens. Thanks to the excellent guitar work, the band succeeds in channeling their harsh black/death metal assault into recognizable and well-rounded songs, at times reminding me of a cruder Körgull The Exterminator. It's on top of this already aggressive and volatile mixture that come the vocals of Diabolical Fuckwitch of the Black Flame (best moniker ever in my opinion), with some of the lowest female vocals you probably ever heard, sounding utterly menacing and demonic. I can only think of one other singer to compare her to, and that's Dana Duffey from Mythic and her vicious guttural delivery. The combination of these demonic vocals with the harsh music makes for some pretty abrasive metallic extremity, that sure hits the spot when it comes to black/death metal.

The production fits the music as a glove. Everything can be heard clearly, yet the sound remains gritty and emanates underground spirit, just as it should on a release in this genre. Everything on this release sounds powerful and energetic, propelling the music forward with frenetic intensity, delivering the goods in admirable fashion.

At first I didn't know what to think of Savage Necromancy and their debut full length, because it sounded a tiny tad more refined than I had expected, but after repeated spins I did start to appreciate their take on the black/death/thrash genre. Granted, there's nothing new happening here, but they have delivered another great album in the style. Together with like-minded acts like Terrorsaw, Violent Hammer and Putrid, Savage Necromancy keep the flame burning, and for that I thank them.