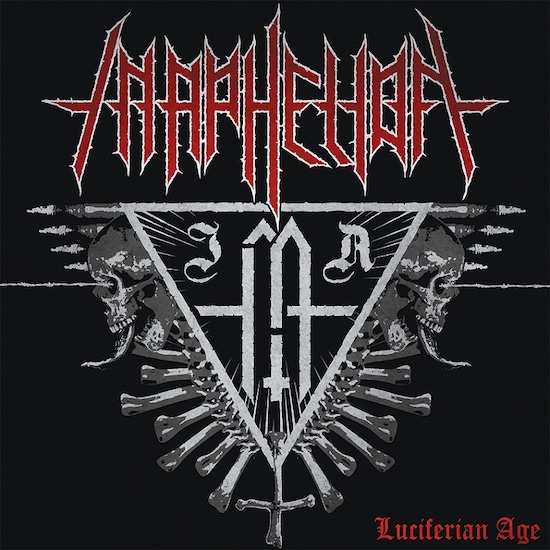 I guess most of you know Necrophobic, Swedish death metal legend since the early 90s. I think they didn't release any weak albums so far (okay, let's leave "Womb Of Lilithu" aside) and at least I am always excited when they release a new album. But actually, I am not here to talk about them. So why do I mention Necrophobic here you may ask? Well, the answer is quite easy – main songwriter and guitarist Sebastian Ramstedt (who is doing the vocals here, too) joined up with his band partner Johan Bergebäck and Cryptosis drummer Marco Prij to form another band called In Aphelion. After their simply titled demo Demo I they now release their first EP called Luciferian Age (a full-length will follow next year).

First of all, a very lucky guy who probably was born when the Great Fire of London burnt down 4/5 of the city asked me how much Necrophobic sticks within In Aphelion, and I have to say that it is about 70%. Of course, this depends on the fact that Sebastian Ramstedt writes the songs for both bands, so you cannot deny the characteristics. But now let's not talk about this EP in theory, let's go more into detail. The EP starts with 'Draugr' that has a very atmospheric beginning with some spoken words which builds up the tension to release its full anger quite soon. It turns into a quite galloping track which also could have been on a Necrophobic album. Nevertheless, the black metal elements are what are making the difference to them. I would say that here is much more Bathory influence (especially the riffing) than Necrophobic would ever do. But also, some really classic guitar riffs can be found here which shows the quality of the musicians here. 'Luciferian Age' is a quite simple but very catchy track with a mid-paced tempo and it's quite a banger with a driving riff and quite simple but groovy drums. It is a quite cool pace-giver when you go jogging! The third track 'Wrath Of A False God' starts very fast with some riffs you may know from 80s German thrash bands like Kreator or Destruction and has a very melodic middle-part which again shows the technical skills of the guitarists. And again, we can find some elements present which would never take place on a Necrophobic album like the very epic guitars in the song. This is a very interesting track with a lot of twists indeed. And finally, the cover version of Kreator's "Pleasure To Kill". Well performed, close to the original, no complaints here! But it´s worth mentioning that Dennis Holm from Avslut played the bass lines on this track!

'Draugr' and 'Luciferian Age' will also be on the upcoming release Moribund. The other two tracks are exclusively on Luciferian Age. I guess this release is a very cool appetizer for the first full-length and gives a quite well overview about what is In Aphelion. I'm hoping that they will be quite successful with it and maybe all three bands (In Aphelion, Necrophobic and Cryptosis) will go on tour together. That would be quite cool!! Before I forget it - you will soon find the reason for founding the band and much more in my detailed interview with Sebastian on MetalBite, too!