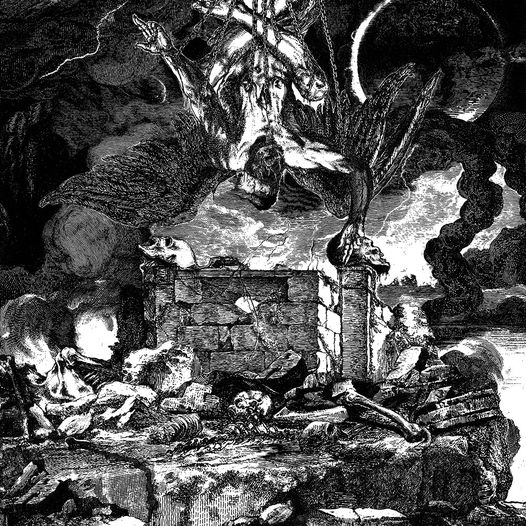 Obscurity is but an understatement when trying to describe the presence that is AZOTHYST. After having read the promo text associated with their upcoming EP Blood Of Dead God, it's clear there is much more circulating this entity that seems to thrive off whispered references and brief utterances of their name. A Canadian sect of metal conspirators scatters their first printed work within the underbelly of black metal. Feral and frightening, their craft is augmented with a wretched and putrid feeling that sounds all too familiar yet the body of the beast remains branded by afflictions of its own by its own hand.

From the 'Rites of Ascendancy', the sonic sphere is shook by militarized drumming tossing the listener into a prism of panic with a sense of impetus and urgency. The riffs advertise an occult seriousness that is magnified through the sorcerer tongue calling into existence and immediate effect, the spells of tarred and long damned and dead lexicons. Far beyond the understanding of a typical metal fan and without doubt easily surpassing the laughable efforts of overnight black metal bands; what AZOTHYST offers sits deep within the soil of esotericism.

The practices conducted by AZOTHYST are adept and would shine through 'Bestial Blood Temple of Ritual Predation' that would take the listener to audial ultimatum with ease. And though, a track being 'Eradication Altar' would bear similar properties, the result does not linger in monotony, rather it expands into the cavernous moans of 'Graveless Mass' that sees the ritual come to close before the band regresses into its state of stillness.

Neither your friend nor foe, AZOTHYST aim beyond what the eyes can see and ears can hear. Get the ritual through the black conduit that is Vault of Dried Bones October 1st 2021.