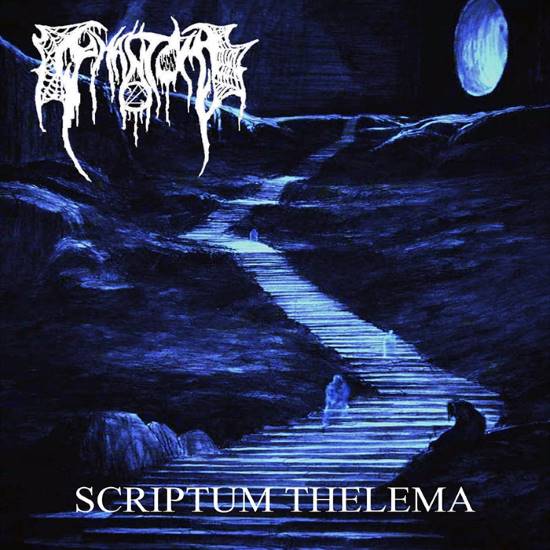 Thelema's call shall reach to our mortal ears, as the heralds of such message are the Chileans by the name of Phantom, who display an all-out, in-your-face brand of death metal that will please both fans of the old ways and more recent brands of the craft as well.

With a small intro followed by ritualistic toms and sustained down tuned chords, Scriptum Thelema opens up and becomes even more fiendish in few seconds. With such great opening and sudden change of pace, it may remind old-school fans of Massacre's "From Beyond" mixed with a bit of "Scream Bloody Gore". The riffs are all reminiscent of the early work of Death, while having twists and turns of its own. This comes as no surprise though, considering that main guitar Branco Bustamante is an avid fan of such work, and it clearly shows here. Branco is also responsible for the vocals, and while they may not be innovative it's a more than competent vocalist for the job, with a very low growl that complements with some shrieks here and there. Unlike his vocal work though, the guitars are the strong point of this release, with a wide palette of riffs and solos thrown everywhere, which are complimented with the band's second guitar player; Bastian Ilabaca, who's also a great player in his own right. The bass, handled by Branco as well, is actually very audible and follows the guitars perfectly, with its weight being very present and adding a much-needed punch to the whole sound here. The drums, in charge of Hugo Galarce, are absolutely demolishing, changing direction and tempo in a blink. Frenzied rhythms as well as doom-esque drumming are served in tasty doses while not being overly technical or using more than needed.

In terms of production, every instrument is perfectly audible. Guitars are really heavy; bass is audible enough to note its presence. Drums are with a pinch of reverb, and vocals as well. The band clearly understood that the production didn't have to be overly polished. It retains that touch of lo-fi production that death metal once had, without it being detrimental at all to the overall quality of the music. However, I feel some small discrepancy in the sound of the album, as some tracks seem to be mixed a bit louder than others. This however is a minor thing and can be easily overlooked.

Overall, it is an excellent album and one of my current favorite death metal albums from Chile. It may not be innovative, and it doesn't have to be. With 7 tracks and a runtime of almost 29 minutes, this is an absolute recommendation for fans of Massacre, Death, Repugnant and similar old-school bands. The album is available on the band's YouTube channel and was released in both cassette and CD in 2020 and 2021 respectively. So, if you like your death metal in the old way, this is a great choice for you.