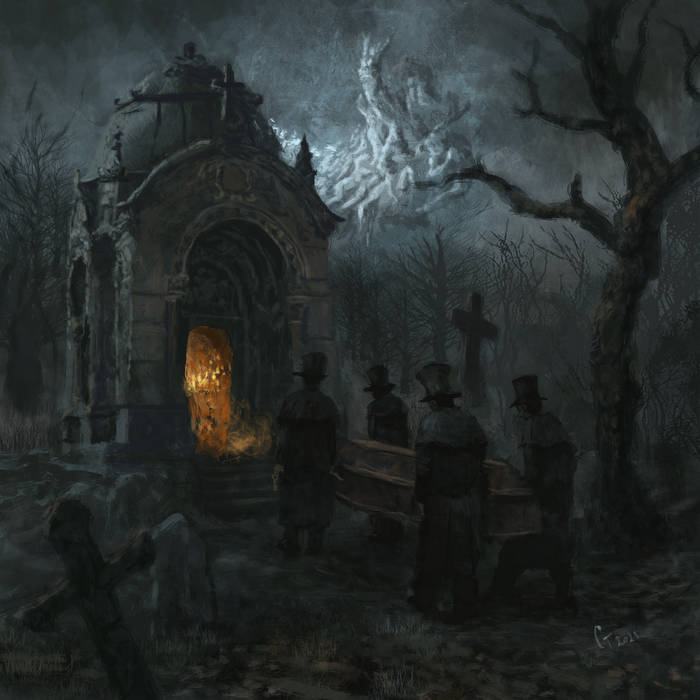 You mean to tell me that the dynamite duo of Tibor and Lambert had this prepped for us; then this year is looking like the most competitive its ever been since maybe 2016. So many pro bands putting out new material that it has become extremely difficult to select a top 5 for the year thus far. Cryptworm and Tyrant Goatgaldrakona guys just levitated, leveled and squashed our beloved underground with Rothádas. Explosive and obscene, a death/doom/grind atmospheric ailment eating away the core of the DM spectrum. Five forbidden seances to send you plunging into an abundance of darkness and transgressions unspeakable. Roughly translated to 'He died barren ... to the underworld', Kopár Hant... Az Alvilág Felé summons a boulder of sound upon the listener that becomes ever burdensome to carry as its gravitational force increases with each note played. And as referenced before, the atmosphere, the ambience reeks of an unsettling, omnipresent feeling. Like having to watch behind you back every few seconds, the fear factor is brought to the center stage and emphasized with each song featured on Kopár Hant... Az Alvilág Felé.

The commencing track 'Utolsó Kenet' for a while through its opening riff is redolent of Temple Nightside's 'Exhumation; Miseries Upon Imprecation' and Ritual Necromancy's 'To Raise the Writhing Shadows'; forgive the name dropping but if you're mentioned along them, then that's a praise and nothing else. The there's the way it eases into your memory like a leech to your skin, you won't notice it till long after being drained by the suckling organism. From there the music builds, grows steadily in it's crepuscular crescendo; heavy weighted and tumorous, tendrils infected and truncated by the chopping swings and mammoth voices of Lambert whilst Tabor lays down his exhilarating, mossy yet exquisitely and expertly timed riffing and bass textures that'd make for good segue into 'Koporsószeg' which ups the songwriting. Rich in melody and ambiance, the conjured aura, all but nearly seals you into its catchy rhythmic coffin trance. Paralyzed and suffocated, engulfed and intimidated by its funereal stature and stare, Kopár Hant... Az Alvilág Felé works like a ritual.

The record walks a thin line between musical competency and trance which is damn impressive considering so many bands forget or overdo it with either incorporating too much technical ability or making their album monotone. There's just an adequate amount of both hence you won't feel pressured by either aspect due to their stealthy incorporations and introductions. The production on Kopár Hant... Az Alvilág Felé also helps as its with this Rothadás are able to hit key points and express the identity of the album. There's lots of definition and dynamic in the compositions as you'd hear the drumming and riffing on e.g., 'Kripta' undergo multiple changes in structure but still keep the primary temperament of the album in tact. Then there's the artwork that looks as Kopár Hant... Az Alvilág Felé sounds. Occult, blasphemous and daring.

Just a complete package from back to front, Tibor and Lambert have outclassed themselves and many playing this form of DM, yet there is still such a long distance to go once you've set foot upon this territory. Will you last or will Rothadás pick and claw at your rotting shell.