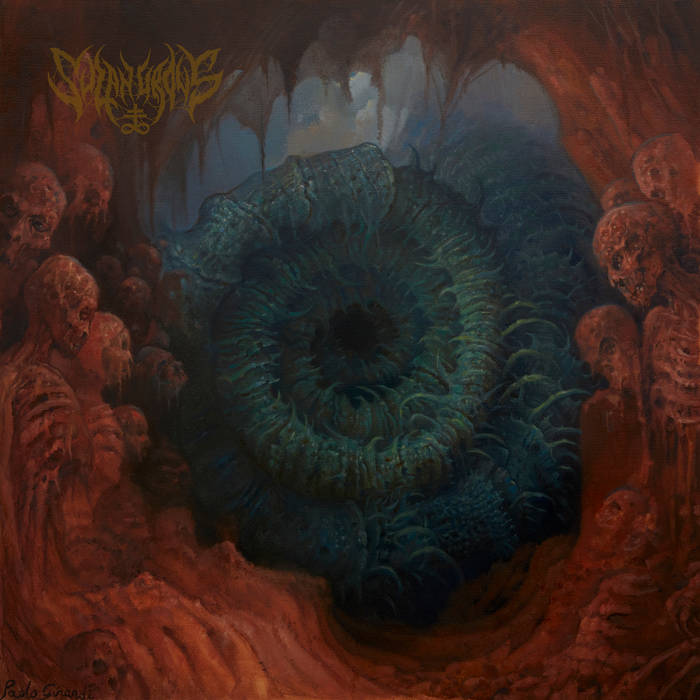 Since Dolorous Death Knell, Sulphurous has had many eyes pierced on them. It was an act that stuck its foot out at a time that saw some of the best modern death metal acts release highly praised music. Nevertheless, this would be no intimidating factor for the lads involved in Hyperdontia, they stuck to their scythes and released a monstrous mass of pillaged flesh on a barren and burned landscape. Now once again the duo behind the sulphuric structure has resurfaced with yet another suffocating entry titled The Black Mouth Of Sepulchre. The beasts' name has been lurking around since its first full recording, but the silence has somewhat been broken with this latest effort that now sees the band take on the challenge for a higher podium position.

If you enjoyed their first album then this installment will surely pique your interest, it’s that plain and simple. Dolorous Death Knell was a smacking album, but The Black Mouth Of Sepulchre is on a different level. Whilst hearing it you can't stop thinking "more". Its compositional structure is a beacon in underground death metal and a delight to supporters of the sub-genre.

This album has a good dose of variation in the riffing structure that may even be perceived through the ear of the listener as somewhat technical at times. 'Dry Breath Of The Tomb' has some of this working alongside catchy riffs showing off the songwriting strength of the band. Then there's songs like 'Shadows Writhing Like Black Wings' and 'Eyes Of Fury' that make usage of similar techniques but to greater avail as a stronger sense of rhythm is kept alive.

One takeaway after listening to The Black Mouth Of Sepulchre is the sound of the band that gives off a slight Nile vibe. I might be wrong but that feeling won't go away. Middle Eastern sounds come to fruition ever so often with sharp but short-lived/teasing instances and bursts marinated into the makeup of the record. Plus, it must be noted that these highlights could not have been possible without the drumming being so fluent and accurate in playing with the riffs instead of playing over or against them, in turn easily adding definition to the music on The Black Mouth Of Sepulchre.

These 40+ minutes fly by so fast its surreal when listening to The Black Mouth Of Sepulchre. Never a moment you feel like the material is just dragging on or becomes tasteless, each composition as a whole feels complete, adequate and necessary. Then the artwork adds to all the glory, putting the finishing touches on a marvelous piece of death metal.