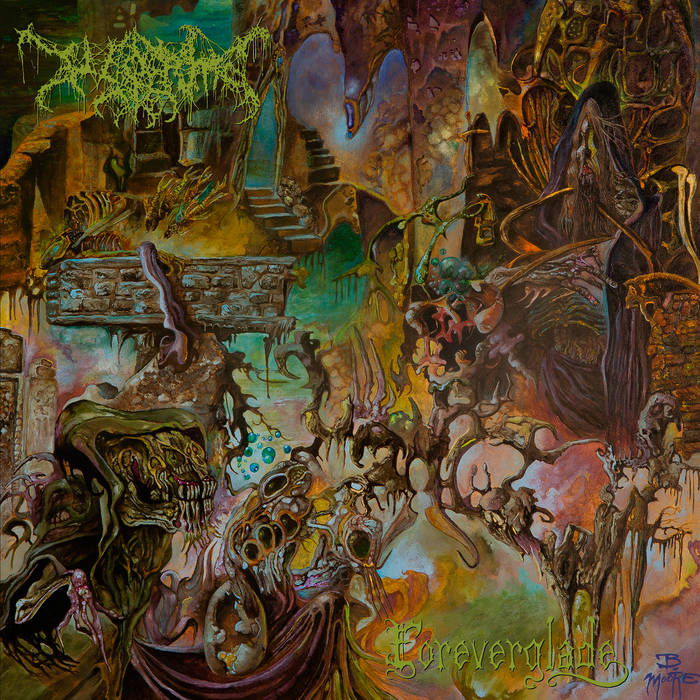 I think what Worm did with Gloomlord made it seem near impossible to outdoor, but to hear Foreverglade and think that it’s not a superior album to Gloomlord would be a lie. The growth displayed by this Floridian sect is amazing, they went from the rotten and stinking Evocations Of The Black Marsh to the graven Gloomlord and now a haunting, keyboard, organ and synth romanticized Foreverglade.

While the genesis of Worm's newfound and unexpected immeasurable support came through their sophomore album released through Iron Bonehead, Fantomslaughter for the most part seems like a pretty chill guy. It’s not very usual that artists this sort interact so openly with their supporters, except for a handful such as more recent to memory Trevor of heavy metal band Haunt. Plus coming from a black metal background its more likely than not that obscurity and seclusion surround the member/s. Fantomslaughter on the other hand surprised me when Kens Death Metal Crypt featured him in an interview where Gloomlord, future recordings and just his metal upbringing in the Floridian scene and general metal topics were discussed. Hence the excitement for the new monolith Foreverglade began to really build stir in motion.

Foreverglade pieces-together everything you love about Gloomlord and adds a colorful and more atmospheric, sprawling template to the primary texture of Worm's music. From Disembowelment to Mystifier, Encoffination, Evoken and My Dying Bride (among many others), Foreverglade delicately prepares a poisonous yet tasty, picturesque embodiment of their phantasmic portrait on their latest funeral/death/black/doom practice.

The foggy, crepuscular opening of title track 'Foreverglade' which also introduces the listener to Worm's haunting sound through the adaptation of keyboards and synth, eloquently sets up the record and wastes no time establishing the primary audial aesthetic of Foreverglade. Onwards, Worm in an even more emboldened demonstration sprinkle beautiful particles across the album with pieces such as the thunderous and epic, yet haunting 'Cloaked In Nightwinds', 'Empire Of The Necromancers' and 'Centuries Of Ooze' that fetch the bulk of the weight needed for developing and progressing the record into a fully shrouded, dimly lit atmosphere, thus being the standout tracks for me. Yet in surprising opposites of Foreverglade's bleak, barren and desolate landscape, you'd discover melodic, keyboard-driven passages that shape the ambience into dreamy auroras nearly sheathing the dense and dark blossoming.

Not abandoning their black metal roots, Worm seamlessly sew into Foreverglade's fabric sharp snarls and shouts that peak on the indelible 'Empire Of The Necromancers' via that build and burst into an incandescent crescendo towards the closing moments. These vocals are contrasted by cavernous growls that feed off hulking power-chords which are satisfying to absorb as they provide a meaty shell to the emote and piercing guitar solos. And about the riffs and solos on Foreverglade, they're like fireflies trapped in a dark pit emitting light, or some sort of ominous glimmer just beneath the froth settling atop a stagnant body of water. You'd hear this truly manifest and take a hold on the centerpiece of Foreverglade, 'Centuries Of Ooze', as Worm's strengths are collected and magnified from the beginning of that song and last all the way to the ceremonial closing that take a plunge into depression via the crestfallen enochian chants almost dragging you into the forbidden territory of Worship.

In addition to Equimanthorn and Fantomslaughter, it appears 2 session musicians under the guises of L.Dusk and Nihilistic Manifesto with the former handling drums and the latter executing addition guitar duties. Compiled with the soothing and sublime synth compositions of Equimanthorn and Fantomslaughter's vocals, guitars, synth, and bass, Foreverglade has proven to be yet another much needed shakeup in the metal underground. Foreverglade is a crushing and sullen yet poignant and saccharine entry in the Worm swamp.