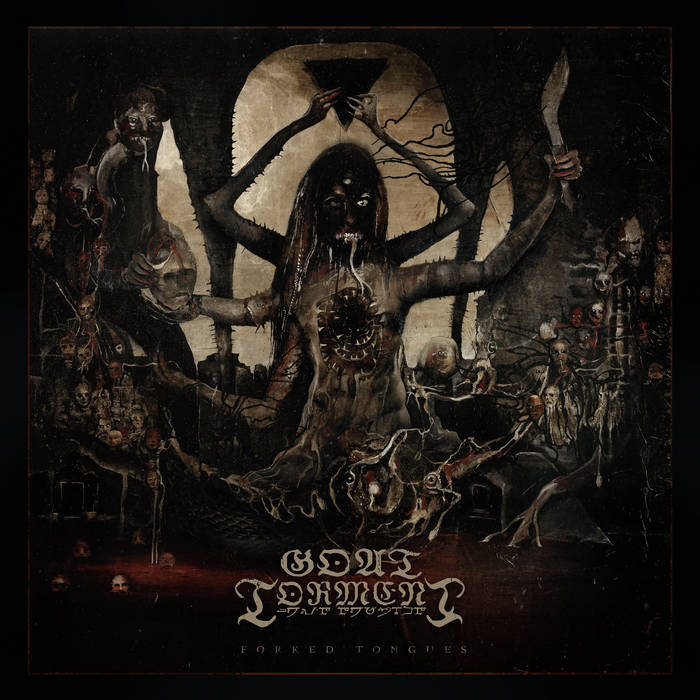 Black death metal is something I cannot enjoy the whole day long, but from time to time I like to lend an ear to this form of our favourite music. Goat Torment from Belgium swim through the same swamp in which already unwashed creatures like Belphegor or Impalement (Switzerland) have left their traces (and their dirt). This means that the roughshod and mangy approach of the goat tormenting trio has nearly nothing in common with the elegant (yet simultaneously infernal) ideas of bands like Necrophobic. The Belgians have another understanding of melodies. They are less smooth, more hammering and constantly violent. This means that the admirable eloquence of the Swedish legend remains out of reach for Goat Torment. But they find their own way through the self-made wasteland of terrorizing sounds – and some of their melodies do not lack impact. Especially those of 'Cursed' and the title track are like blazing fires that come nearer and nearer until they almost scorch the listener’s skin. Too bad that the following intermezzo immediately lowers the temperature again.

Forked Tongues refreshes the listener with its impetuous, unbridled songs that go hand in hand with the violent production. Instruments and vocals are well-balanced, do not lack pressure and have the right amount of aggressiveness. Even the rarely occurring atmospheric moments, for example in the center of 'Deceitful Faith', sound vigorous. This song also shows impressively that the band is able to increase the heaviness again. The mild mid-part with narrative, more or less clean vocals, transforms naturally into the devastating end. No doubt, these guys can rely on a certain degree of maturity and songwriting skills. I don’t say that each and every song blows my head off, because every now and then a rather average riff, a not very exciting guitar line or an emotions-killing blast beats part has crept in. But all in all, Goat Torment lay a clean track and thus it is only logical that they do not derail during the 43 minutes of bestiality. By the way, the band also knows the value of a strong closer. 'Charnel Houses' is not among the absolute highlights of the album, but it boasts with energy and velocity.

I don’t know why I did not buy an album called Forked Tongues during in my first 52 years on earth and now I have already two works with this name in my collection. Okay, the outstanding record of Craven Idol cannot be beaten, but Goat Torment (brutal vocals, apocalyptic aura, dark guitar sound) deliver everything it needs to satisfy a black death metal lunatic. And I guess we can be sure that they do not perform their music half-heartedly. So in my humble opinion, 7.5 is the correct rating for this recommendable storm of evil.