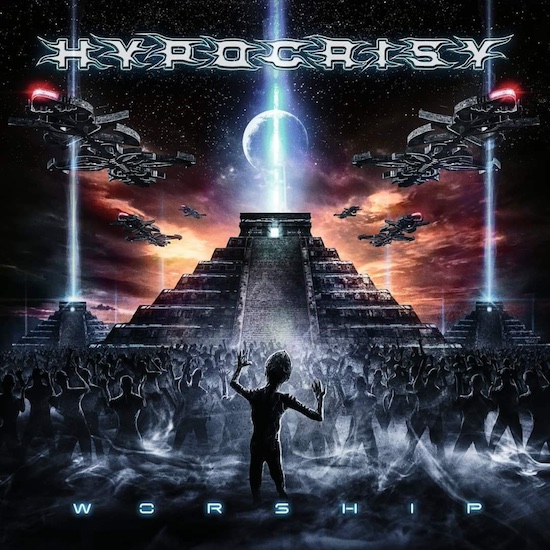 Swedish melo-deathers (though I don't like the term for the band) are back after eight long years without releasing any new stuff. I have to say that I was pretty surprised when I read the announcement of releasing a new album and pretty curious what there would come towards us. After a quite okay 2013 album (The End Of Disclosure) and two quite average albums before that (A Taste Of Extreme Divinity and Virus) I have to confess that I didn't expect too much.
So here we go now with Worship.

First of all, I have to say that I like the cover very much. An Aztec pyramid where a crowd and an alien are gathered to await the coming of (probably) aliens which travel in the typical Hypocrisy crosses is a really cool idea. To focus on the music, the album starts with a calm guitar intro which develops into a typical Hypocrisy track with a very rhythmic part, catchy melodies and I would say that 'Worship' could have found its way on a Hypocrisy album back in the early 00s. 'Chemical Whore' is a gloomy and also very melodic track that lives from its slow, creeping and threatening atmosphere. Peters voice underlines this dark atmosphere and for me it is one of the highlights of the album. 'We're The walking Dead' comes up with another typical Hypocrisy melody arc and the riffing from 1:00 on (don't laugh) reminds me a little bit of Dire Straits. It is a very epic track with great keyboard arrangements that raises a slight oppressive atmosphere. Another track that keeps you in mind is 'Children Of The Gray' which sounds very similar to a lot of the songs Hypocrisy once wrote for their 1996 album Abducted. Riffing, vocals and the melodies I'm quite used to and because Abducted is (besides Penetralia) my all-time favorite by Hypocrisy this is awesome to my ears. I originally thought that it would be a continuation of Roswell 47 but Peter told me that this a regular track without any connection to other songs. 'Another Day' is a very fast and brutal track which however stays quite melodic though and which has a very catchy middle part. I guess it is one of the fastest tracks the band has written in about 20 years or so. I don't want to tell you about each track because you should explore the tracks on your own. What I can state is that Worship has no really weak tracks and shouldn't be a disappointment to all of you who are into older Hypocrisy stuff.

The production is very strong and balanced, like the last productions that Peter did for the band, too so that here are no surprises at all. Lyrically you can think about Peters conspiracy theories what you want, maybe it is entertaining you or not; I guess you all know about his topics.

Finally I would say that the trio did a very good job with the album (though we don't find any new ideas here, but like Peter said to me, he didn't need to reinvent the Hypocrisy wheel) and I am pretty happy with that. Beam me up, Scotty (or whoever is flying the Cross UFO ehmmm UAP).