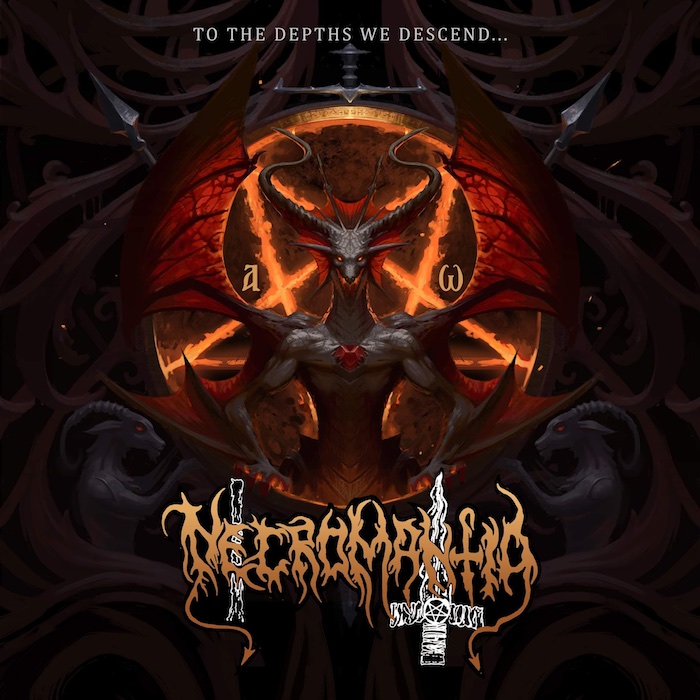 Type: Full-Length
Release Date: October 15th, 2021
Label: The Circle Music
Genre: Black
1 Daemonocentric
2 As The Shadows Wept (...For Baron Blood)
3 Give The Devil His Due
4 Inferno
5 Eldritch
6 To The Depths We Descend...
7 Lord Of The Abyss MMXXI
8 The Warlock MMXXI
MetalBite on YouTube

"Farewell my brother, farewell my friend
Ride the dragon in the center of the abyss
Your soul is now free”.

Wow, these are quite sad words when you know about the story of Necromantia. You may know that Baron Blood, the founding member of Necromantia (aside of Magus Wampyr Daoloth) died in 2019 and so the band has decided to record a farewell album called To The Depths We Desscend... to pay a final tribute to him. This is a really tragic story, especially if you think about the fact that Necromantia is one of the originals of the Greek black metal scene. But let's put these sad and nostalgic feelings aside for a few minutes and concentrate on the thing that should be in the center – the music.

Necromantia have recorded eight tracks from which two are re-recorded from the 1993 debut album Crossing The Fiery Path. These tracks are 'Lord Of The Abyss' and 'The Warlock'. All tracks are lovely arranged and very melodic as we were always used from the band. Though the black metal influences are clearly in the foreground of the compositions, you can often find classic heavy metal riffs and even some real classical music arrangements in the songs, too. The band creates a very dense atmosphere through the mid- or fast-paced riffs and the quite impulsive basslines. Often, they create a very majestic atmosphere through the epic drums and the echoing guitars which are combined with real bombastic keyboard sounds. Even if they only use keyboards and bass, like in 'Give The Devil His Due' they create a somehow oppressive mood in the song. Each track has its own character, so you always find new facets in their music and every listen brings you more into their farewell album. When there are pure keyboard passages, Necromantia create an atmosphere like in old horror movies which create a creepy, gloomy mood I would say. You always fear that something evil is going to happen very soon. At least I have this feeling when listening to it now for the x time. Maybe I shouldn't listen to it at night.

Well, if I had to recommend some songs, which is really hard for me because all tracks are outstanding, I would say that 'And The Shadows Wept' is a very remarkable song because of all the arrangements and the great break in the last third of the song. 'Eldritch' is another cool song because here the bands play at a very fast speed, something that doesn't happen that often and is real great black metal performance. Also, the aforementioned two old songs that were re-recorded are great, maybe even better than the 1993 versions. But also, all the other tracks (yes, also the instrumentals) are very good and each track is worth listening to.

Well, now it's time to say goodbye to Necromantia, a band that was always a true companion in my metal history. It was a great time with you, may you rest in peace, Baron Blood!!!! About my rating, there can only be one score (due to the fact that To The Depths We Descend... is their best output in my eyes and there won't be another one).