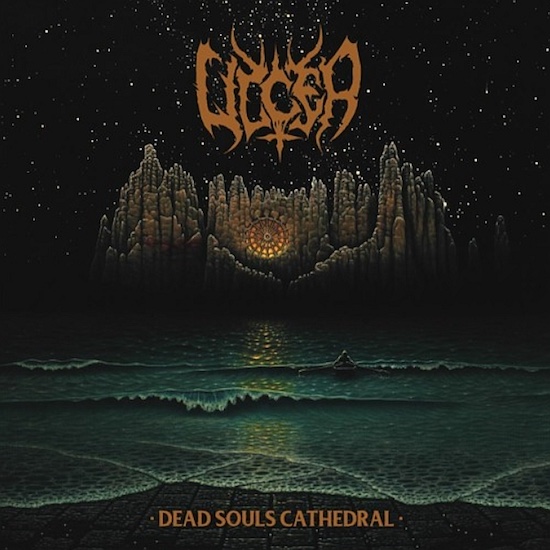 There are reasons why I don't listen to a lot of modern death metal bands. Mostly because (in my opinion) the current bands try to only be faster and more brutal than the previous ones, without caring too much if the end result is cohesive at all. The unnecessary brutality, combined with the more pristine modern production, are the two biggest reasons why I dislike modern death metal (if not modern extreme metal as a whole). So of course, it's not surprising that many fans (and musicians) prefer this particular style in the old way, with a rawer production, atmospheric approach and controlled brutality. And Ulcer's latest record, Dead Souls Cathedral, is a testament to the old ways of this art, with just the slight pinch of modernity, but nonetheless brutal and evocative of the early years of this style.

This album opens with a very brief intro, an atmospheric sound that abruptly ends as the guitars take control before the whole band gets in the action. I just love the overall sound of the record. The guitars sound absolutely crushing, murky and really down tuned, yet the riffs and harmonies are more than distinguishable and lemme tell you, these riffs fucking kill! From down paced headbangers to faster, frantic playing, there is a wide variety of riffs throughout this album and while some may be less memorable than others, they nonetheless are perfectly executed. Solos are added as well, and not just for the sake of being added. They actually contribute to the overall songs, and it is evident that the solos are specific for each track. As it tends to happen with most (if not all) of extreme metal, the bass is barely audible. You can actually feel its presence despite the low tuning, but there aren't that many moments where you can listen to it, except in certain moments that its left alone. The drums are great as well, and what I like about them here is that it doesn't rely on excessive blast-beats or over-the-top drum fills. Instead, the drums here are more of a controlled fury. Mid-paced rhythms and double-bass pummeling are the dominant drumming here, and it helps the music retain a more evil, eldritch atmosphere that is added thanks to very specific keyboard segments placed in some tracks. These segments elevate the music's atmosphere to a whole new level and are part of what makes this record so great. Last but not least, the vocals are actually well done here. The performance is actually great, and you can actually make out part of what he's singing. His growls are complemented with high shrieks in most of the tracks.

Although some riffs were not to my liking, and that the bass is (once again) barely noticeable, it is nonetheless an outstanding record. A testament that death metal in the old ways is still favored and practiced and that atmosphere is one of the keys for such task. Beyond what I've stated, there aren't many flaws in the record, although as a side note, 'Eternal Night' is not really memorable, and the album could've worked just as well without its inclusion. Overall, a great album, one of my new favorite records and if you like your death metal in the old ways, then get it!