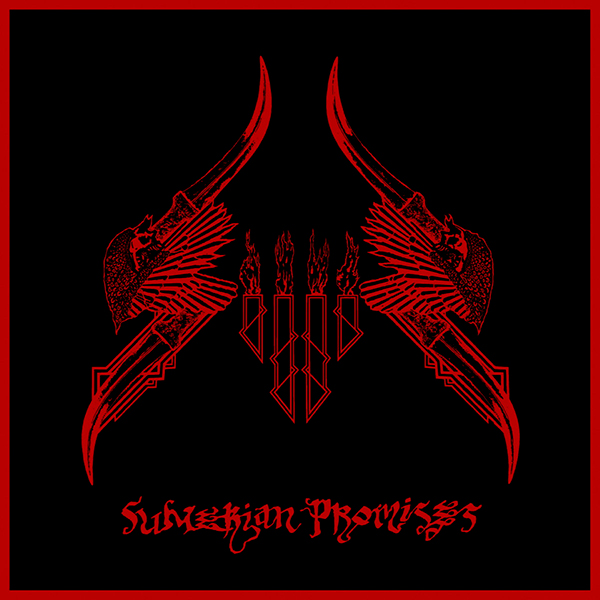 I was very disappointed when German black deathers Necros Christos announced that they will split-up because they released some very good (maybe you can call them essential even) albums in their career. I was a bit happier when a friend told me that mastermind Mors Dalos Ra of Necros Christos aka Malte Gericke had formed a new band called Sijjin. The first sign of life was the demo Angel Of The Eastern Gate in 2019 which continued more or less the way Necros Christos had left after their disbanding as in quite cavernous songs with morbid riffs and very harsh and raw vocals. I would say that this output is not for easy listening but to take your time and listen to it intensely. Again, this friend I mentioned up above sent me a link of a new track by Sijjin which I had to check right away. And of course, this meant that a new album would follow, soon. Finally, today I got the new album as a promo in my mailbox, and I had to check it instantly.

If you are familiar with the Necros Christos albums, you will probably notice that Sijjin have increased the speed in the songs and switched from pure death-doom to more death combined with thrash metal. Whilst the songs by Necros Christos lived from the mystical atmosphere that was created through some instrumental parts and the slow-paced, creeping songs, Sijjin define themselves through a very dense and intense atmosphere created through the driving riffs and the very catchy and twisting songs. But now let's go for the tracks with a little bit more into detail. I won't talk about all of course but I guess it's worth mentioning the most outstanding tracks in my opinion. Sumerian Promises starts with a very thrashy song. If it wasn't for deep vocals and the lower-tuned guitars it could be a very fast track by Slayer, I guess. This is quite a very big surprise right at the start of the album. The next tracks are very old school death metal. Straightforward riffs with thundering drums and the usual deep throated, somehow quite scratchy vocals by Malte. Sometimes some very melodic, Morbid Angel-like solos are built in the tracks which is very entertaining. The title track 'Sumerian Promises' is a very fast and furious track that increases its tension during the 4 minutes playing time. 'Unchain The Ghost' lives from its hypnotic and quite repetitive riffing and makes this track a very catchy one. Here and in 'White Mantras Bleed From Black Magic' you can also see clearly the thrash influences and the worship for Morbid Angel. Finally, 'Outer Chambers Of Entity' is a great and very thrashy song which could have been written by Slayer (at least the first minute of it). Again, this is a very catchy track which spreads evilness and hatred.

The production is very well done, quite atmospheric and quite adequate for a death metal album. It was recorded in Black Storm Studios (Spain). Mix and the mastering was done by Ekaitz Garmendia, the guitarist of Sijjin.

I would recommend this album to all Morbid Angel fans (the Morbid Angel albums from A-D) and to all hobby archaeologists who like to dig in the stuff of ancient Sumer. By the way, I read a few days ago that Nile will release a new album, too. Maybe this would be a great billing – Sijjin and Nile (and the location is a great historical museum, maybe in front of the Gate of Ishtar in the Pergamon Museum in Berlin)