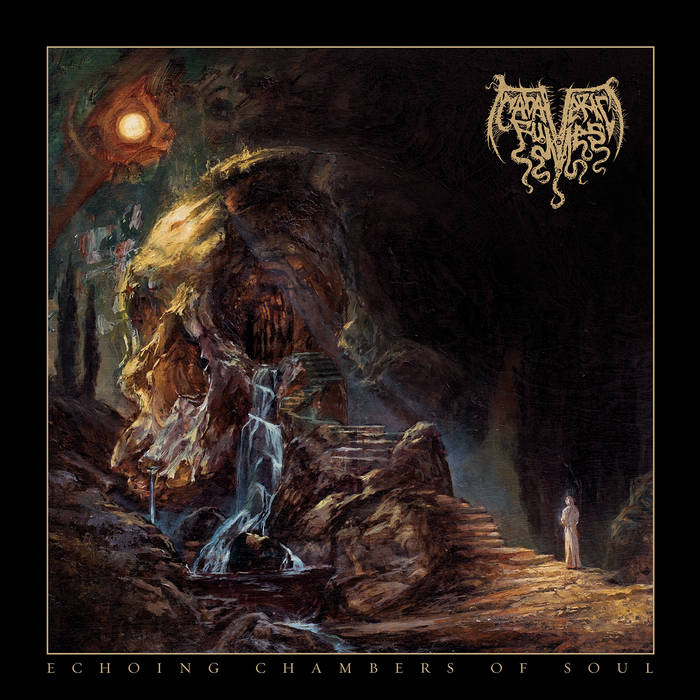 So, I was made to understand that this album has been 5 years in the making and will be the first and final full length from the French death metal band Cadaveric Fumes. What do I remember of this band? The name I recall being referenced in some promos a few years ago and as far as their music goes; nothing. Great! now I get to hear the identity of a band scream out in its final labor of love.

Setting up an album with this sort of promotion behind it usually welcomes the possibility of massive disappointments. Not the case here as the main takeaway after listening to Echoing Chambers Of Soul is satisfaction. Yes, there are things that could have been done better but for what Cadaveric Fumes seemed to have been aiming for, they did enough to garnish mostly favorable results. It sounds as though they had been looking to carve out a sort of ritual-sque/trance death metal whilst still having a fair share of variation in the build of the compositions. Let's say somewhere between a Morbid Angel (instrumentally) and 2 other bands I'm too exhausted to call from memory.

The songs are moderately followable and for its short run time of around 35 minutes you're punted to the end rather quickly. I've found myself steadily returning to the music to pick-out something that maybe was missed, having to dig deeper and deeper every time as becoming familiar with the songs come rather easily. And this goes back to what was said earlier about what could have been done better and the band not applying these factors to the greatest effect. I don't think this was due to a limit in their musicianship as it's clear they have the textbook death metal notes memorized; rather, it appears as though the band pulled-back at certain points during the album to maintain that balance of having the music sound of a mixed breed; both hypnotic and semi- technical.

Opening track, 'The Stirring Unknown' strikes you as as a pummeling piece to the puzzle but with the end of that song comes an audible maturity as they begin to evince more feel and emotion with not just the interludes, but also mid-paced passages stretched out and mid-ranged guitars aiding in the development and movement of the music. You'll find this occurrence in 'The Engulfed Sepulcher' and 'In Cold Astral Sleep' that eclipse in the song writing department bringing thicker and more emotional textures into action as the album progresses. That being said, you'll get the feeling the guitars could have been louder in the lead department rather than having them nearly buried by the bassy mix because they shine on aforementioned 'The Engulfed Sepulcher' and 'In Cold Astral Sleep'.

The artwork is beautiful and gives a glamorous depiction of what's to be expected on Echoing Chambers Of Soul. Just a little bit of everything fine-tuned to fit and come together as a connected collective. It's an album that leads to new discoveries with each listen and sounds of as though it had been in the making for quite a while. As to the band, will they reemerge under a new name following the dismantling of the current? one would hope so, as there seems to be imprisoned within them more musical strengths that were not suitable for Echoing Chambers Of Soul.

A true landmark for Cadaveric Fumes and a shout towards the horizon of coming musical endeavors should they continue.