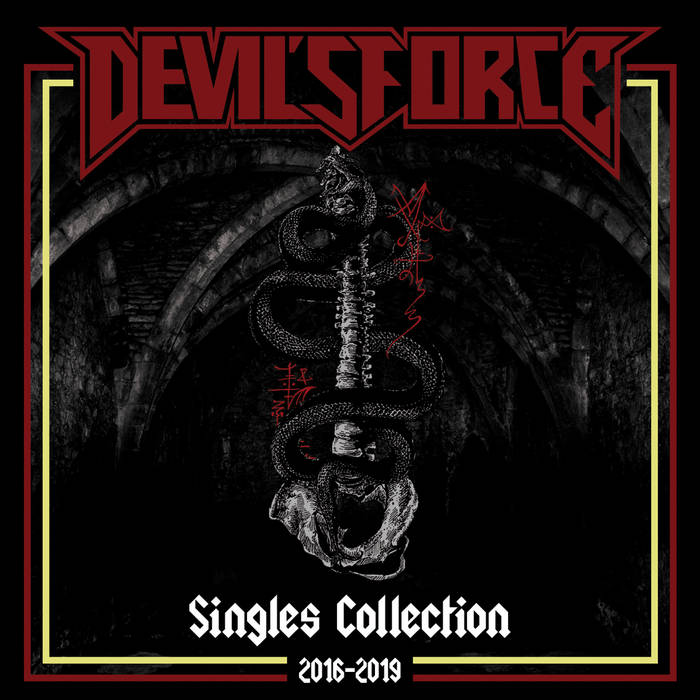 Blackened speed metal is certainly an interesting hybrid subgenre. Most people usually see black metal as violent and humorless and to a certain extent some bands are, but that is why black/speed is a refreshing and a welcomed break.

Today we have the Swedish solo act Devil's Force to check out and one thing that should be made clear about this release is that it's not an album, it's a compilation of singles. This comes with both its pros and cons; the cons are that it doesn't flow like a proper album and each song has a different feel, but on the bright side, because all songs where individually released singles and an excellent cover of Bathory's 'War', they all have a distinct flavor and punch. At 33 minutes, the experience is short and sweet, and the best part is that there's no filler at all. The only other major issue is just what most people always point out about metal, and especially speed metal, which is homogeny, but then again, Devil's Force's goal is clear from the music's overall tone and feel, it's meant to be metal thrashin' mad time.

Main man and multi-instrumentalist Pierre Törnkvist, with Devil's Force displays all the best aspects of black speed, but also manages to have a genuinely catchy groove and swagger to his music. Some black speed bands usually focus on frenzied speed and sheer aggression, but Törnkvist adds a layer of classic rock n' roll and even punk attitude to have music that's enjoyable but without losing any grit and savagery that's fundamental to all extreme metal. Think of the raw melodicism of Motörhead and Judas Priest combined with the rebellious exuberance of early thrash and the savage and unfiltered edge of early Bathory and Venom. All in all and excellently crafted style, which also displays how talented Törnkvist is.

While this is certainly a neat collection of songs to drink and mosh, it's not meant to be much, but on the bright side, it's an excellent display of what a Devil's Force full length could be and achieve.