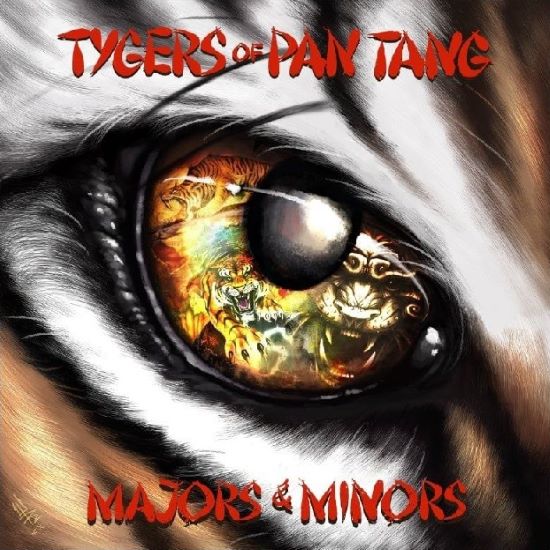 "Okay, welcome to our first lesson in heavy metal history today. Who knows about animals in heavy metal band names? You over there sitting on the left?"
"Heavysaurus?"
"Em, yes, okay but first a "saurus" isn't an animal and second the dinosaurs are extinct. Another try, come on – yes you here in front of me, please."
"Airwolf?"
"Yes, this is a very good answer, but we don't deal neither with the German band nor with the helicopter. Maybe another one would like to try? You there who is permanently tilting with his chair!"
"Scorpions!"
"Yes, quite a good answer but I'm looking for a band which is alive"
"But sir, the Scorpions ARE still alive!"
"Really? I think that they are dead for about 25 years now but still didn't recognize it. Okay, I will give you a hint. The band has four letters in its name and one word is written wrong. Nobody? Okay, another hint – the name is taken from a story by Michael Moorcock."
"Sir, I know it!!! It's Tygers Of Pan Tang!! But they are not active anymore!!"
"Please raise your hands instead of shouting your answer!! But you are completely right with the name. Only the fact that they split-up isn't correct, they are still alive!!! So it seems that you learnt something new today, now I will tell you some more about it!"

Well, actually this would be a terrible lesson with me as a teacher, but fact is (and I somehow didn't notice it until I got the promo) that Tygers Of Pan Tang are still alive and currently have released a compilation of songs from their last four albums called Majors & Minors. This is not only intended to be a 'best of' from these albums but also some tracks which aren't played too often on their concerts and didn't came out as singles. What we can listen to on this compilation is some very fine hard rock / heavy metal with catchy melodies and excellent songwriting. Of course, these tracks don't have much to do with the old Tygers Of Pan Tang back in the 80s but they still know how to grip the listener.

Concerning the musicians on this compilation, the only constant are guitarist (and only founding member remaining) Robb Weir and vocalist Jacopo Meille, whose debut for Tygers Of Pan Tang was on the first of the represented albums on this compilation (Animal Instinct). One could say that the compilation is also a representative cross-section of his work in the band.

'Only The Brave' is a classic heavy metal stomper with a very cool guitar solo in the middle part and I guess it's a good track to start with. 'She' starts with a very groovy Kiss riff ('Lick it Up') only a little bit faster and its kept in the mid-paced tempo. The track spreads the atmosphere of some rock bands of the 80s. 'Never Give In' is one of the fastest songs of the album and convinces through a dramatic riffing, great chorus and a very melodic bridge part. Maybe 'Painkiller' would be a fitting reference to this track. 'Worlds Apart' is one of my favorites of the album. Very melodic and heavy, quite an epic hymn with great guitar work (I still cannot stop name dropping – that somehow reminds me of the first Hammerfall album). 'Glad Rags' is another trip into the early 80s when bands like Mötley Crue or Bon Jovi were starting their career. Take your hair spray and put your stretch jeans on!!!

I guess it is quite boring if I would go too much into detail with every track so let me sum up that Majors & Minors is a very successful compilation of some tracks from last four albums. The tracks present some classic hard rock and heavy metal music without any experiments or modern touch so it should be worth listening to for everybody who likes some traditional metal music. I think there are no failures on this release and I had fun listening to the tracks. It is like some kind of easy listening, and you can listen to it while you play sports or when you drive your car as well. If you maybe have lost sight of Tygers Of Pan Tang in the last couple of years or you didn't know about them, this is a pretty good way to check if you (still) like them. Check the release, it is worth listening to and if you like the tracks, maybe you get interested in the band (again)!!