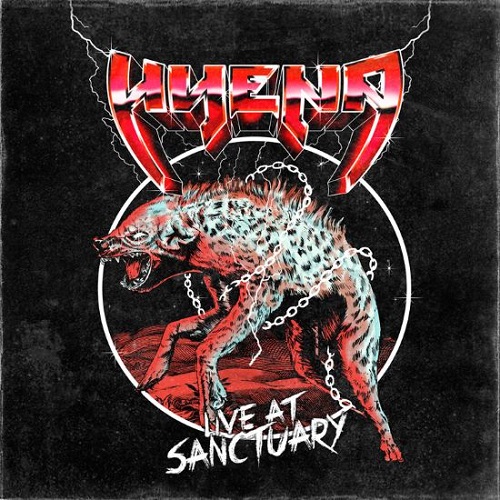 Well, I have to say that I don't really know too much about Peru. The first things that come to my mind are the mysterious Nazca Lines, the even more mysterious (and probably fake) alien mummies found nearby, the Inca and the Rain Forest of course. But until now, Peru was a white spot on my heavy metal map. I don't know how often I already wrote that I don't know this or that – it seems that I know pretty less of the world; I should be driven through my hometown like Cersei Lannister with somebody who is permanently screaming "shame!". But you never learn out, maybe this is a good thing though.

The band which finally made me mark Peru as a metal country on my map is Hyena. It is a very young band which was founded in 2018 with now five guys playing in it and they released up to now a demo, an EP, a split (with Peruvian Mandrágora) and with Live At Sanctuary a live album (though it was a live stream without any audience due to Corona circumstances). The album starts with a short introduction and goes over into a driving speed metal riff like Swedish Bewitched did on their track 'Hard as Steel, Hot as Hell'. But soon the listener will notice that the Peruvians don't play blackish touched speed metal but more classic heavy metal in the vein of old NWoBHM bands like Judas Priest, Raven or Saxon. The vocals are kept in a high tone paired with very high-pitched screams; the drums are very dominant and pacesetting (but not drowning the rest of the instruments) and the guitar riffs appear very old-school-like. You soon realize that the guys really can master their instruments very well. All tracks are very catchy and have a great party potential, 'It's About Rock n' Roll' is predestined for this. A cool chorus and energetic riffs, combined with gang shouts and some smooth riffs – like Ozzy once said: "You can't kill Rock n' Roll"! The cover songs match perfectly into this attitude: 'The Beast' by Danish Randy (taken from the 1986 single "Shadows are Falling") and 'Starmaker' by British Battleaxe (taken from their 1983 debut "Burn This Town") – a very fine and quite remarkable choice that shows the influences of the band very clearly. The other self-composed tracks are keeping up the same level ('Keep It True' is a great Judas Priest Tribute song!) and show that the quintet may have a bright future in front of them.

I really don't have any complaints about this release. I think it has a very good sound quality for a live stream and the performance is really convincing. You can hear that the guys have a lot of fun playing live (even it is only a stream) and I hope that they soon will have the opportunity to play in front of an audience. The only two things that somehow make me sad is:
1. The winter is coming soon so you cannot sit outside, drink beer in the garden and spread the sound of Hyena into your neighborhood and
2. The playing time is only 21:22. The record makes you want more music by Hyena!!!

So come on guys, hurry up and record a full-length album asap!! Hopefully before next summer!!