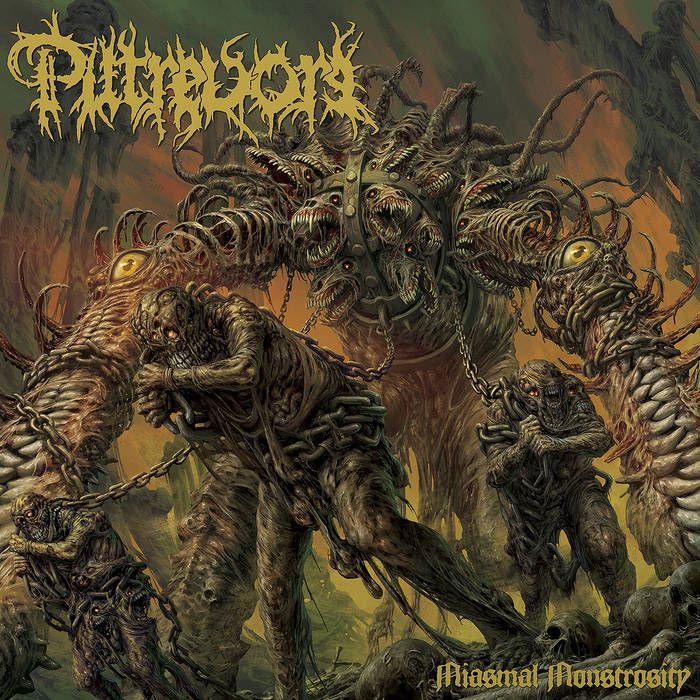 Putrevore has to be the most impressive death metal band Rogga Johansson's name is attached to. He's involved in more bands that you can count on one hand, all of which are fairly good, but Putrevore is unmatched the way I perceive it. The songwriting, tone and execution is in a league of its own compared to another band he's involved in. Not so long ago he was involved in albums released under Revolting and Paganizer both of which were commendable to say the least but Miasmal Monstrosity under the Putrevore banner has a lot more of what I expect when the term old school death metal is used.

Evident from the first guttural note that this band was no joke, 'Those Who Dwell Beyond' lands you in a puddle of hurt. An explosive display of metal from the riffing and drumming right down to the vocals that sound as though an underground swamp of muck imploded. For most, that track alone would be more than enough to keep them invested; easily a winner for me but the real menace of guttural excretion struck immediately after; 'Vortex Devourer'. Mother of septicemia, this track is a fucking monster, it brings to life the cover image that so easily balls-up the effect of this album.

You'll feel shat on and decimated by the time Miasmal Monstrosity is done. A steaming 60-foot pile of dung comes tumbling down the death metal tunnel with 'Clad In Skin And Rot' that has a rather ominous guitar riff around the middle section. Paired with the gargantuan, gurgling vocals, this song crushes. And it must also be noted the installments on Miasmal Monstrosity all sound of their own, bearing different faces of delivering the mess.

These songs promise a beating and that's precisely what you get; Rogga ravages and rapes the guitars and bass with powerful pulses and riffs, the drumming does a fair bit of damage especially on the slower parts of per say a song like The 'Fleshment Awaits' as you can really feel the impact and appreciate the support given to amplify the thick audio texture on Miasmal Monstrosity.

You'll enjoy every bit of this record that is easily for me Rogga's best and most impressive musical involvement. You can hear the likes of Incantation, Disma and Undergang on Consume All Flesh via the pinch harmonics, thunderous death/doom breakdown sectors and the vocal snot of Dave Rotten.

Miasmal Monstrosity is worth every second of your time and support if you appreciate real death metal. Gutted and buried under a rubble of broken bones and putrefied flesh, with Miasmal Monstrosity, you'll find yourself amidst the muck and mess of a condemned death metal league.