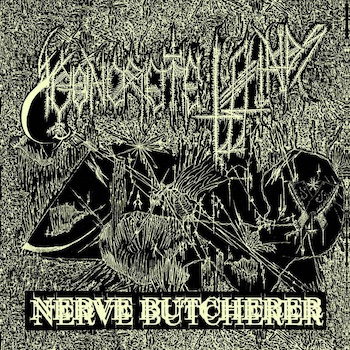 You know what was a good band? Vorum. While that band was great, today we have Concrete Winds which was formed out of the ashes of Vorum by P.J. and Mikko, and after their debut Primitive Force, back in 2019 completely obliterated my ear drums, they’re back with their sophomore record Nerve Butcherer and now I have the best migraine ever. All joking aside, what makes Concrete Winds interesting is how they take the sheer unbridled extremity of death metal and distill it to a blistering degree without the need of genre bending with doom or blackened elements. It’s the most pure and to the point form of death metal you will hear and you better have either a tolerance for extremely caustic music, or just lower the volume because this is the most unforgiving and abrasive record you’ll hear all year.

The defunct band Vorum started displaying these aggressive tendencies with their swansong EP "Current Mouth" back in 2015 and as Concrete Winds the aggression was the point of their debut, and for Nerve Butcherer that’s still very much the case, but there’s a more thrashy and even punk edge to the music but again, P.J. and Mikko succeed in not relying on bringing extra elements to their music. What you hear is death metal and if there’s a thrash or punk influence, that’s because those are already existing components to the genre itself. The main standout continues to be the frenzied guitar riffs and bass lines, and manic drumming. The way P.J. and Mikko play their instrument and their overall performances are completely unhinged and chaotic, but the catch is that there’s a real method to the madness. The songwriting has a bit more technicality that’s in line with early thrash which again is already a core element of death metal as a whole and the music seamlessly blends technical proficiency with raw intensity. There’s no self-indulgent virtuosity nor does the band rely on aggression to counter simplicity, anyone with even a passing knowledge of guitarwork will hear these riffs and solos and be floored at how it balances speed with harshness and legitimate thought-out technique. P.J.’s vocals are the only element that’s still the same as the previous record, his snarling gutturals still do the job and P.J. sounds as demented as ever so in that regard if it ain’t broke, don’t fix it.

The same praise of raw technical talent executed through harsh and raw intensity can be said of Mikko’s drumming. While blast beats continue to be driving force of the music’s rhythm section, Mikko doesn’t rely on them, much like P.J.’s guitars and bass, there’s actual thought and technique in the drumming. Songs like 'Paroxystic Flagellator' and 'Dissolvent Baptism' display how the drumming builds momentum before a barrage of blast beats, as well as bridge sections where Mikko slows to a mid-pace rhythm and it all works seamlessly. What’s more impressive is how the drumming is straightforward and primitive but not devoid of skill or, like I’ve mentioned, technique, and that’s ultimately what’s so unique and even refreshing about Concrete Winds as a whole; their ability to make music that’s so abrasive and intense but with a real method and technicality that’s more often than not absent or purposely handicapped in order to achieve that straightforward rawness. Concrete Winds compromised nothing and succeeded by embracing their talent as well as their passion to fully realize their vision. In terms of where is this band’s brand of death metal coming from, the influence of Morbid Angel’s "Altars Of Madness" is ubiquitous at this point, but people familiar with cult band Necrovore and Sweden’s Merciless will also hear some familiar elements with this record. Make no mistake though, Concrete Winds aren’t recycling past convention or worshiping those bands, far from it, the sound you hear in Nerve Butcherer is uniquely their own, and the sound display is an organic evolution from the raw extremity of Primitive Force into a well-oiled machine of destruction. The rough edges and even the shortcomings of the previous record were properly sharpened and at 27 minutes the band has a concise package that does the job and ends when it needs to. The one issue that the previous record had was with the production and a lack of variety in the music, and while there’s still a case for this type of music being somewhat one-dimensional, what its important is the intention and what the band want to do with their music, and Concrete Winds excel at knowing exactly what they want to do with their music. It’s a sincere no bullshit execution and the band succeeded in fixing the issue of repetition with their aforementioned technical skills, adding a layer of dynamics.

The final aspect and one of the biggest improvements the band achieved with this album is the production. While I usually have no issues with a raw and unpolished production, the first record could be a very unpleasant experience. While on some level that’s the point, the raw, compressed and bass heavy sound of that record was really strenuous to sit through (especially with headphones) and where this record is an improvement is how the band retain their caustic sound but with a more polished and professional production. Where the sound is more clearer but also more punishing in some areas, so as a disclaimer I would still advise people to go into this record knowing their limits, because this will still be an intense and ruthless listening.

Overall Concrete Winds deliver another dose of pure madness in music form, and I for one cannot get enough of this type of acidic and filthy death metal that’s uncaring of trends and fads. Concrete Winds don’t give a fuck, and it’s up to you if you want to jump into the pit, or step out, cause this pit spares none and takes no prisoners.