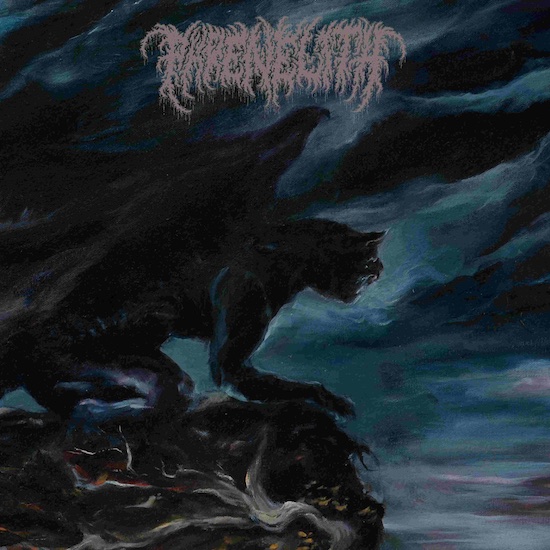 I started off my top 20 albums of 2021 very confidently, however that list slowly began to deteriorate as more underground metal hit my ears. As of now there is no list and will not be any for this year. That last shred was tossed (along with my hopes of ever completing one) into a bin after this vile piece of DM was coughed up from the foul guts of Phrenelith. Where to even begin with this fuckin thing, gaaad dammm!!!!!!, talk about killer shit, here's some for you. A wicked assortment of riffs, drums mashing your temples into a fucked soup and the vocals, yuck! I don't think we've ever had such a competitive year in DM probably since 1992. The number of good records under the genre umbrella this year is hard enough to keep track of and now this. If you're looking for a reason you feel broke and it's not even Christmas yet then here's one, add Chimaera to your vinyl collection.

Let's take the listener by the balls then toss them into the air and whack those mushy nuts with a barbed wire bat. If 'Awakening Titans' did not do anything for you it’s because you didn't survive long enough to hear the remainder of the track. Just check out the licks on that thing, dark and pulsing with audial torment, then something nasty comes tumbling from the throat of none other than the vocal nemesis, David Torturdød (it sounds like). Devoured by the sheer overwhelming muscularity of one track, you're then tossed into an even more agonizing black hole with 'Chimaerian Offspring' and it's no return from there. Then get excreted through the anus of a DM goliath of a track titled 'Phlegethon'. These three pieces could have been all that was gifted on Chimaera and would have still proven sufficient to take a dump on 50% of what comes out with the DM tag these days.

On a more scrutinizing note, the melodic and acoustic intermezzos, bridges and interludes as heard on a track such a 'Χίμαιρα' for example, work to the advantage of Phrenelith and help to add depth and feeling to the music on Chimaera. Thing is it's only 30 minutes or so and very focused, hence it’s hard to take your attention off of what's happening on the instruments. Its spacious in terms of the atmosphere yet tightly recorded, no errors or lapses detected, you'll get the impression that most of what's featured on here had been completed and rehearsed hundreds of times probably since the conclusion of Desolate Endscape (it's been a while). Hence said, I do feel as though Phrenelith could have squeezed in one more track provided Chimaera sounds as though it's been sitting ready for a very long time but that's just my proposal though I could be wrong.

The strikingly dark and prowling artwork I understand was done by illustration master, Timo Ketola who moved on to conquer another realm. The music you'll get on Chimaera enlivens the visual projection and easily accomplishes the task of making the listener feel immersed in its world for the entirety of the album. An easy must have for me at least, and I'd expect Chimaera to get the support and appreciation it deserves.