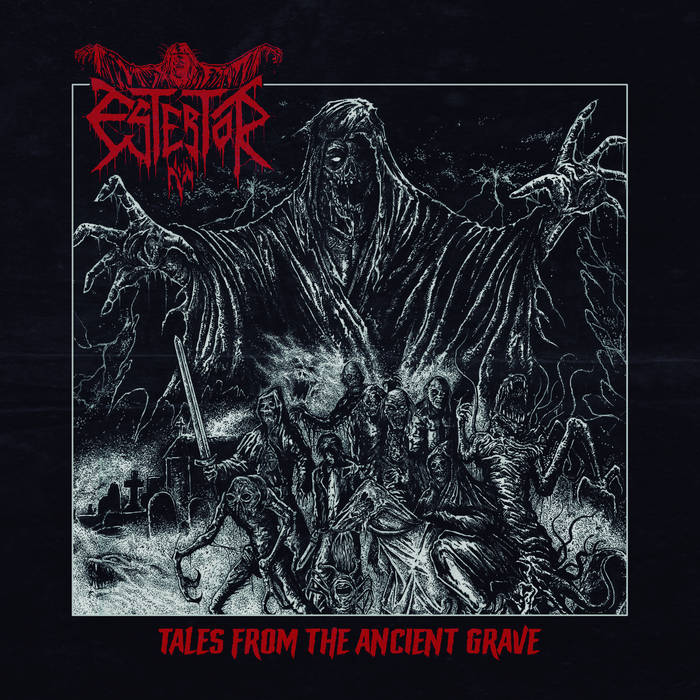 I don't know the debut of Estertor, but the first thing that caught my attention were the vocals on Tales From The Ancient Grave. Lead vocalist Edu, possibly a fan of Tom G. Warrior who was born too late, loves to sing with an operatic, theatrical voice. Sometimes his performance almost sounds like a parody, but a very good one, haha. I really enjoy his vocals that give me a remote Bulldozer feeling. Anyway, don't expect typical thrash shouting. The expressive approach of Edu is something completely different – and it works nearly always excellently.

The riffing is more generic, but in no way boring. Estertor's guitar heroes send sharp riffs and lines into the universe and nearly all of them have a somehow drastic undertone. Estertor do not concentrate on high-speed, but sometimes this makes their riffs even more crunchy. 'The Torch That Corrupted The Earth' can tell you more about this. It belongs to the highlights of the album, due to the well-hung riffing and the chorus that crowns the song in an impressive way. Last but not least, an Celtic Frost "Ugh" is not missing. Great.

Speaking of well-hung riffing, already the intro of the opener features this element. But 'Assimilating Flesh' is no doomy piece. After a first "Ugh", it turns into a very well-arranged wild ride. Even during the pretty long instrumental sequence, this neckbreaker does not lose its momentum. It is not only a strong opener. 'Assimilating Flesh' also reveals the high quality of the production in a matter of seconds. The guitar tones do not lack cruelty, the vocals are neither too loud nor in the background and the drumming has been allocated an appropriate place as well. Okay, the bass guitar comes off badly, but I guess this is not the first and not the last output that suffers from this fact. After all, the transparent yet somehow malicious production delivers the right frame for the material.

A little surprise is 'Blood For Sheetar'. It emanates some boozy punk vibes in view of its flowing guitar line and the pretty primitive chorus. There are better songs on Tales…, but even this somewhat airy piece makes fun. Nevertheless, the real face of Estertor is as charming as the 'Repugnant Face Of Death', a song that explodes after a movie sample (right?) and melancholic first guitar tones. Estertor show again that they are able to combine high-speed fury with great more or less melodic lines and a reverberating chorus is not missing. Every tempo shift increases the dynamic of the track and so another jewel is formed. The following title track also has a lot to offer, but maybe its calm break was not the best idea. It’s a bit too long and robs the song of a few percent of its power.

'Worship The Black Goat' with its Baphomet's Blood comparable guitar work marks the final speed attack, because the closer falls through the net. After a more than acceptable beginning with the typically sawing riffs, 'Keeper Of Hell' derails in the second half due to the warped vocals that sound like the howling of a dog that has been hit by a shotgun. So what? Tales From The Ancient Grave is a really recommendable, pretty individual work that deserves the attention of every speed / thrash metal maniac.