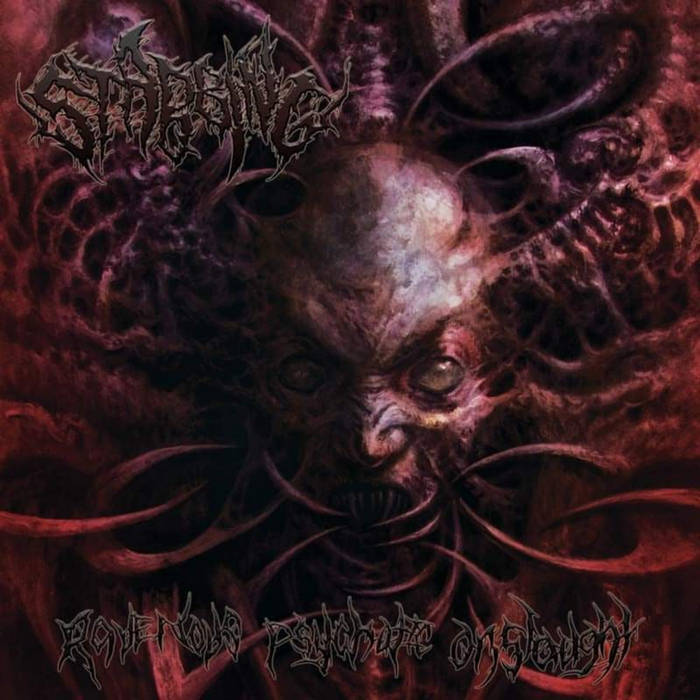 Ah yes, Comatose Music strikes again! This label seldom fails to deliver the goods when it comes to brutal death metal, and that's saying something, because if there's one genre where the critique "it all sounds the same" can often aimed at, it's this one. Now, having put that statement out there, let me go on to say that the ladies and gentlemen of Stabbing do not exactly reinvent the wheel here, but that what they do, they certainly do in style!

In case you skipped my laboriously composed intro above and might have missed it: Stabbing play brutal death metal. If I have to compare them to other acts, I'd say Atrocious Abnormality, Putrid Pile, Disgorge (the US one) and Lust Of Decay aren't far off the mark, but I think any aficionado of the style could conjure up the names of a fair share of others as well. All the characteristics of the style make an appearance here: from the down-tuned guitars that go head-to-head with some massive guttural vocal work and blasting percussive ferocity, to the pummeling grooves and pulverizing breaks, it's all here. The music is poured into varied songs that don't skimp on the brutality, yet manage to keep focus on the whole. The compositions don't lose themselves in extravagant technicality or unnecessary guitar wank, but are kept simple and to the point, making all four tracks effective blasts of death metal ferocity, exactly the way one wants this to sound. The production keeps it all powerful and direct, even if the guitars could've been more in front of the mix, but that does not diminish the sheer power this EP exudes.

This is quite the impressive first encounter with this band. Perhaps the lack of an identity of their own could be a point of criticism for some, but in my opinion this is totally obliterated by the excellent execution and pulverizing music. This is a near-lethal dose of brutal death metal mayhem, and you can pull me out of bed in the middle of the night for stuff like this.

Bring on that full length, please! I am eagerly waiting for it.