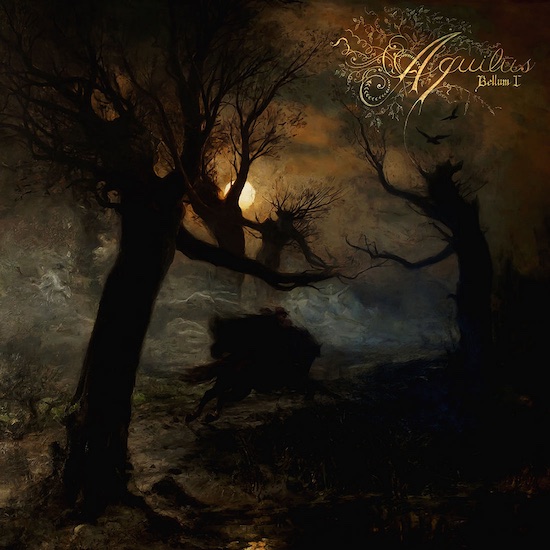 I was unfamiliar with Aussie progressive metallers Aquilus prior to this month, their evidently well-regarded 2011 debut Griseus having passed me by a decade ago. However, it took only a few bars of the impeccably composed intro 'The Night Winds Of Avila' before I was intrigued to hear more, as the swells of classical strings wrapped themselves around the Rachmaninov-style piano runs, before the crunching down-tuned guitars of the first of a number of lengthy tracks signalled the collision of the band's progressive death / black metal with the classical arrangements that surround the band's music throughout. The tonality instantly reminds the listener of much-missed UK progressive types To-Mera, and the band share the cinematic approach of that band, albeit relying to a lesser extent on the metallic part of their complex and bewitching sound.

The 'symphonic' label is, of course, not especially unusual to encounter in the metal underground, even if it has long since passed through the phase in which it seemed a ubiquitous feature of black metal (although Stormkeep's new album may yet drive a resurgence of that particular style). Aquilus, however, are in a completely different category to bands such as Dimmu Borgir or Behemoth in their use of symphonic sounds. Rather than utilising strings and horns as an additional texture to adorn tracks that are primarily built around conventional metal instrumentation, it is, for the most part, the classical elements of the Aquilus sound that drive each track, the guitars and rhythm section often secondary to the enigmatic soundscapes put together by the band's mastermind Horace Roseqvist.

Occasionally, as on stand-out track 'The Silent Passing', raging tremolos and blasting drums emerge through the orchestration to briefly take centre stage. Just as quickly though, laidback acoustic guitars and woodwind lines again win the battle for supremacy, with atmosphere prioritised over aggression, as it is across much of this superb album. Bellum I (the first of two halves of what will be an epic proposition) is a majestic and grandiose achievement, which positions Aquilus firmly at the forefront of the classical / metal crossover, and will indubitably reveal new secrets with every listen.