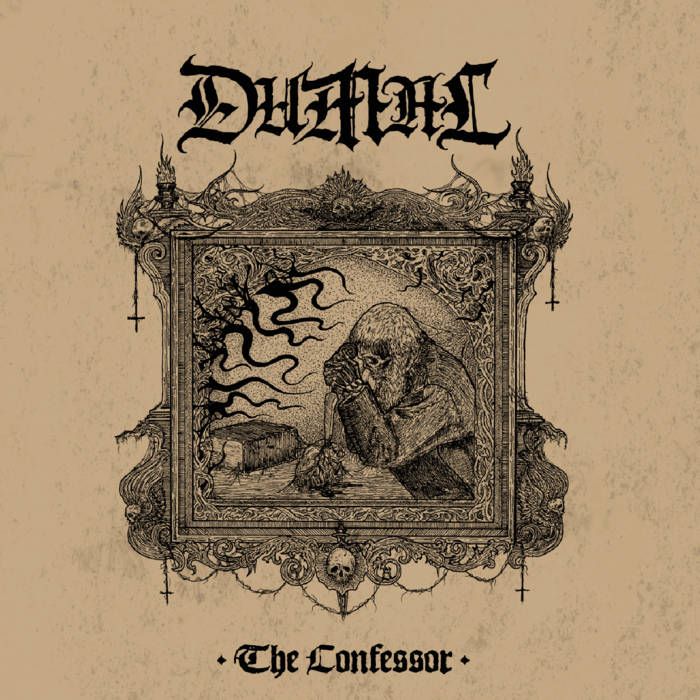 One of the most common criticisms often found in extreme metal, and especially in black metal is the “lack of originality” or “bringing nothing new to the genre”. While in some cases that’s warranted, since a lot of bands in black metal tend to just recycle themselves or be glorified worship bands, for me, in many cases feels the same as if people started criticizing painters for using a canvas and watercolors. It should be about passion, sincerity and drive, and that’s what brings me to today’s band Dumal, and their 2020 sophomore record The Confessor.

Dumal is an American black metal outfit that since their debut album The Lesser God has been making the rounds in some circles, and this record pretty much cemented them as a legitimate and promising act (in the same vein as other modern black metal bands like Spectral Wound and Uada) primarily because Dumal display a highly melodic and aggressive style of straightforward black metal with no embellishments or genre bending. My opening paragraph about “originality” was intentional as from a superficial look, Dumal aren’t doing anything different from the norm, but again, that shouldn’t be a detriment if the music is played with genuine passion and sincerity, and Dumal display just that with flying colors and outstanding musicianship.

The band’s focus is sheer intensity and aggression while maintaining a polished and refined sense of melodicism that’s often downplayed in black metal that focuses on speed and brutality. Dumal’s talent is heard in this perfect blend of melody and brutality. The guitars, bass and drums work in perfect unison and those who have a preference for Finnish black metal will find much to enjoy with this record, as it has that melancholic melodicism of that country’s style. Where Dumal truly make it their own though is with the aforementioned blend of melody and brutality but also by being dynamic and varied with their songwriting. The best moments on The Confessor are the slower and more mid paced sections, as well as letting the somber guitar melodies and howling vocals carry the songs. There’s real thought, and attention put in each song, and nothing feels wasted, despite how morose and forlorn the music and atmosphere this record has. The music is extremely catchy and easy to get into, which is the mark of a truly outstanding band. They were able to make a record that’s accessible without reneging on the tenets of black metal, as the band has both an understanding and appreciation of what works about black metal.

The final aspect worth mentioning is the production which is excellent. The clean sound and mixing make every instrument sound great and the music benefits from having good production as the band’s musicianship wouldn’t have shined as much as it does with rawer production.

Overall, Dumal succeeded despite not doing anything new or unique because (and I’ll say it again) what makes black metal great, is the passion to make the art that you want to make, and Dumal do just that while also succeeding in not relying on their influences.