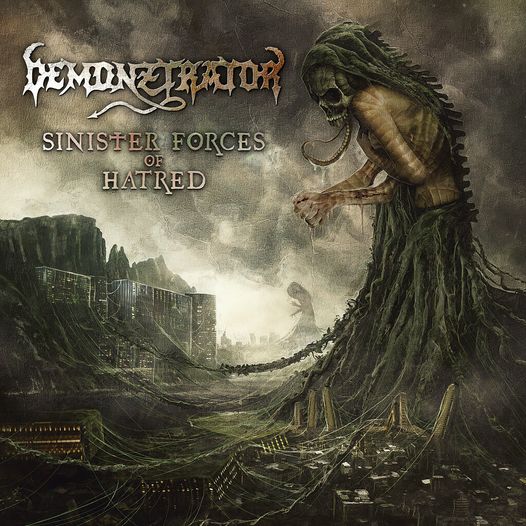 Sometimes I think that every metal musician from Finland has sold his soul to black metal. However, Demonztrator “demonztrate” the opposite. And I should have known that Suomi can play different styles of extreme metal, because two guys of this quintet have already left their footprint with The Scourger, a great thrash formation that called it a day much too early. Their second album “Dark Invitation To Armageddon” should be part of the record collection of every thrasher who wants to be taken seriously. Alas, Demonztrator do not breathe the mountain air that The Scourger inhaled, but they also run their business competently, at least from a technical point of view.

Sinister Forces Of Hatred does not belong to the albums that start with a fantastic opener and whose quality crumbles with every further song a bit more. This is both blessing and curse. It feels good to experience the energy of songs like 'Nail Them All' and it’s a joy to get in touch with the more or less atmospheric yet powerful parts of the multi-layered 'Into the Mouth Of Madness'. On the other hand, the opener 'Murderlust' sounds almost as stupid as its name indicates. Free from any kind of melody and suffering from an extremely primitive chorus, it appears as a hardcore track without hardcore vibes or, in other words, a song that does not know its own mission or aim. From this follows that not the song material, but the production provides the first positive element. Sinister Forces Of Hatred can rely on its sharp, transparent and modern yet lively mix.

Frankly speaking, the song material is not as good as its technical implementation. Tracks like 'The Collapse' do not cause me to look for some strong pills to relieve the pain, but they lack an intriguing idea. It is no new finding, but thrash metal is more than shredding the guitars, pummeling on drums and spitting out genre-typical lyrics. I don’t say that lead vocalist Jari Hurskainen does a bad job, but his performance stands and falls with that of his comrades. 'Crossing The Rubicon', for example, has some great high-speed parts with classically rasping guitars and the verses do not lack bitterness, but the pseudo-melodic chorus lowers the song’s overall impression remarkably. Ambivalent feelings occur again and again while listening to this album; the beginning of 'Scavenger Of War' whets my appetite for more, but the song cannot completely fulfill the promise the first tones make. So, it’s the old story: too good to be ignored, but a comparatively big room for improvement. The pretty raw and untamed form of thrash that the band offers can be done better – and I would be glad if the band proves this with its next album. Until then, I focus on Finnish black metal again.