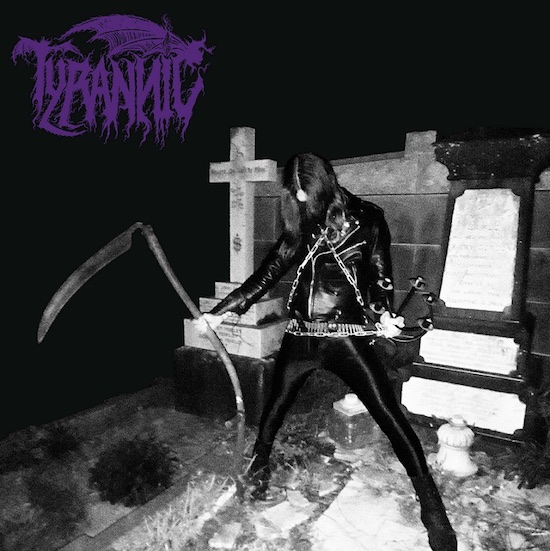 And again I'm reminded of why it's false to judge an album by its cover art, Tyrannic dug into the soil of 1st wave black metal and planted what has now become a very versatile Mortuus Decadence. It's almost as if listening to a merge among Immortal, Bathory, Celtic Frost, Disembowelment and early Mayhem (though not limited to), hence this album is deeply rooted in the most embryonic period of the sonic dark art. And getting back to the cover, you really have to be careful about how you pick and choose in this oversaturated genre; this could have been one of those that escaped my radar but curiosity can really be a good thing sometimes, especially when it's an Iron Bonehead promo.

When black metal and doom metal take hands in matrimony, a grim and morbid thing comes to fruition. Here we have an Australian sect playing the night tunes with patience and skill reminiscent of some of the very first torchbearers, yet sits chaos and tranquil manifesting and maneuvering amidst the music. With each of the tracks baring a lengthy runtime, quite a bit is accomplished. You could take for instance the first track 'Mortuus Decadence' in which sets out as doom metal then is transformed into a very Immortal esque, Diabolic Fullmoon Mysticism dance with Tom G Warrior "uughs" sprinkled atop the mid-paced madness. Then there are these screams that sound strikingly similar to those heard on Impetuous Ritual's "In servitude of Asynchronous Duality" hinting at perhaps it may in fact be one of Impetuous Ritual's members doing these vocals, coming from Australia and what not.

Compile that with sung escalated chants on 'Singe of Orgiastic Waste' and more doom metal this time clung to by a spontaneous bursts of what sounds like Arnold Swartzneggar trying to sing or at least attempting to say something but comes out completely intelligible to even the most advanced black/death metal listener, this album puts you in a strange position of both enjoyment and confusion. Its very dynamic, vocally and in terms of its structure, there is much jumping abbot genres but done in a very fluid and seamless manner.

The atmosphere here is very impressive and truly begins to ascend and fluctuate among haunting, saddening, triumphant and mystique emanations with the introduction of 'Tormented By Deathly Cataract', which also adds to the equation semi-echoed/enochian-esque sung gothic chants creating a near funereal ambiance on Mortuus Decadence. All this is kept alive and very active as you traverse the record; however it's most impressive entry is 'Night Plague Manifest' that uses the guitars to far better effect than on any track in terms of creating a spooky melody to expand the music's depth that's further aided by the acoustic intermezzo and Disembowelment-esque instrumental notes approaching its monstrous 10 minute mark. Adds up, provided the following track 'Osmos Burial' is deeply rooted in Funeral Doom for majority of its runtime before shedding its skin slightly to relieve some of its weight thus giving way to death/doom.

You can't go wrong by picking up Mortuus Decadence, it's got all the traits of the ancient sound we all seek out in black/death/doom and will definitely be massively overlooked for most of the underground if that cvlt as fuck cover doesn't stick.