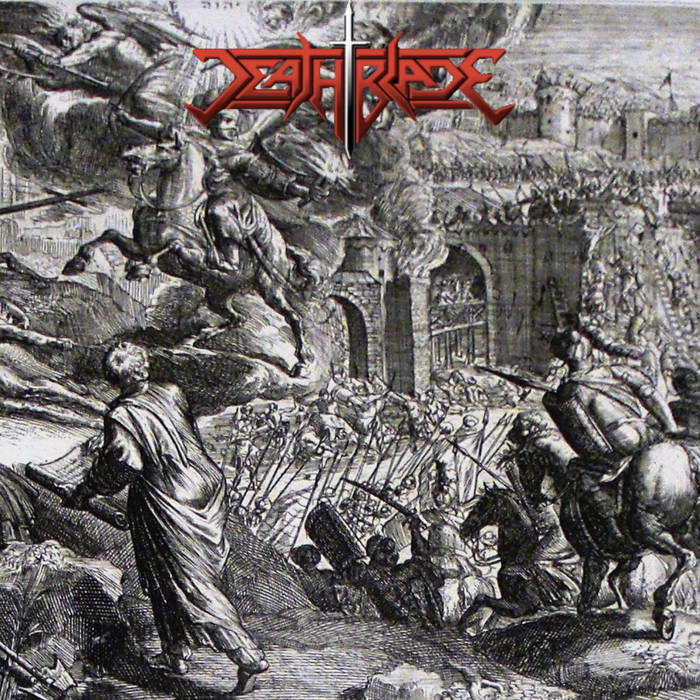 Around the start of 2021, I was fairly intrigued by the demo and EP material of England's Deathblade, which saw the band teasing much of their prowess in the recording and songwriting departments. It makes sense, then, that a thrash metal outfit dedicated to tight musicianship such as this would realize a great deal of their potential across the expanse of the nearly 57 riff-packed minutes which comprise their debut full-length album. Aside from the fact that this self-titled effort of Deathblade is technically impressive, due in no small part to main man Daniel Garner's devotion to his six-string musicianship, it does well in terms of pacing and feels like a sprawling yet chaotic journey through emotional strife and turmoil, counterbalanced by moments of frenetic release. The latter 3 albums of Dark Angel are a good point of comparison due not only to the onslaught of riffs, guitar melodies, and the overall technical ambition seen on a riff-for-riff basis here, but also due to the storied, intricate structure of the compositions.

On the latter point, Californian thrash metal seems to be the main calling card for Deathblade here, as well as an evident NWOBHM influence (see the Diamond Head-inspired intro of 'Biblical Infamy', which then makes its way into guitar leads which reflect a more foreboding counterpart of Iron Maiden). I think one reason that both these metal scenes prove influential to Deathblade is because they were both defined by virtuous musical chops across several of their flagship bands. Alex Skolnick and Eric Peterson of the legendary Testament come to mind as inspirations for both the clean and distorted guitar parts, the former of which is used to a precise and memorable effect. Minor Teutonic thrash elements are also present, as Daniel's vocals combined with the more mid-tempo, abrasive riffing heard throughout this album feel reminiscent of Sodom circa "Persecution Mania" and "Agent Orange".

Certain tracks here are improved from the demos/EPs, namely 'Cessation' and 'Undead Insurgency' which seem to have more fluidity in them when compared to their earlier counterparts - the updates in the recording mix combined with some tighter guitar work and solid drum programming do the job well. 'The Exorcism', meanwhile, is an intense and relatively short track that I feel breaks up the more layered, involved ones and prevents this album from becoming monotonous in its technical scope, least of all self-indulgent. It's still coursing with raw, throat ripping speed/thrash/heavy metal songwriting to its very core. This point of praise is all the more remarkable when considering that the culminating track on this effort is about 15 minutes long, which I will admit is not altogether necessary but is still executed well enough to not drag the experience down.

Furthermore, an instrumental track preceding the outstanding 'Biblical Infamy' also helps cut down on the mundaneness experienced with some technically involved albums in the hour-long range. Overall, I believe the track listing here is well thought-out because of how each piece of music progresses and what each piece lends to its fellow Deathblade songs. This point is evident as soon as the hooks gel seamlessly into some mosh-worthy thrashing in the first track, 'Raze Gomorrah'. Production on Deathblade's debut is also impressive considering the means by which it was recorded - the sound is clean and crisp - although, bassist Aiden could indeed be higher in the mix in order to achieve a grittier experience. All the same, this feels like a highly polished work of thrash.

Daniel's band is a clear sign of technical ambition paying off, rather than playing demanding music just for the sake of it. The music is of course their means to an end, and that end is a mean, punishing, thrashy end. Do not take Deathblade with a grain of salt, this release is outstanding and one of the best self-produced efforts of 2021.