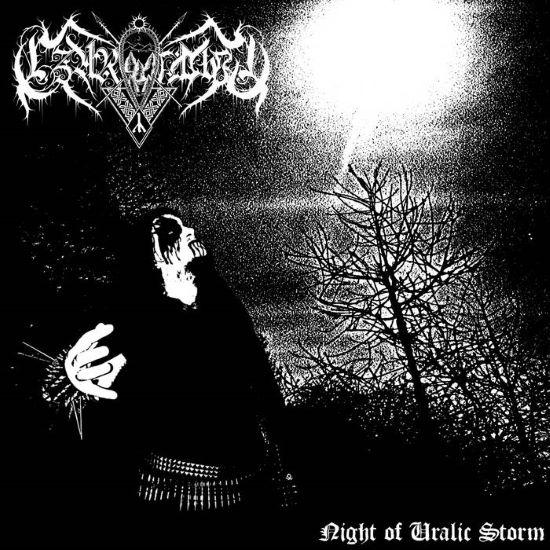 Czarnobog, a one-man-project from Germany with Russian roots, is active for almost a decade and eight albums are anything but a proof of laziness. Nevertheless, the lone wolf that runs Czarnobog managed it cleverly to surf under my radar up to now. And it looks like many other metalheads also lived their life without taking notice of the "band". This, my friends, was a mistake. Night Of Uralic Storm does not revolutionize the genre and perhaps most of us have already heard similar sounding albums, for example Graveland's "Following The Voice Of Blood", but it delivers almost an hour of pure blackness and that's the first reason to like it.

The second reason is not long in coming, because the artist with the pseudonym Wehrgoat does not lack credibility. Both the songs and the design of the CD leave no doubt that the guy is very familiar with the aesthetics of black metal and its form of expression. Of course, the colorless design and the expressive song titles are just positive side effects. However, they set the right framework for the nihilistic music. Czarnobog sounds less minimalist than fallen legends like Moonblood, but their songs are more or less reduced to the essentials as well. The drumming is mostly pretty primitive yet appropriate, the guitars produce genre-specific lines incessantly and the screaming and nagging of the master himself is throaty as hell. But with these common tools, he is able to create different moods. Some parts, in particular the great number of mid-tempo sequences, seem to be written while suffering from horrible pain, some rely on their quite rumbling aggression and every now and then the material surprises with a medieval touch.

The third reason is that the man without band comrades knows how to intersperse the right amount of melodies. Most of them work pretty effectively, not only the very good at the end of the ten minutes plus piece 'Call Of Astral Blood'. Now I hear some of you say "f**k, these overlong tracks are always a torture" - but this time there is no reason to cry. All songs profit from their natural flow and so the album refuses stubbornly to get boring, although Wehrgoat is not very generous in terms of the number of different riffs per song. 'Funeral Of Black Hearts', the second monument with a length of more than ten minutes, confirms the compositional skills of Wehrgoat once again. Here we have skillfully used keyboards that reinforce the atmosphere of the meticulously constructed track. And yes, it's true that the strengthening of atmosphere is the most function of keyboards in black metal, but that's neither my nor Wehrgoat's guilt. Having said this, 'Funeral Of Black Hearts' with its simple riffing, the well-placed breaks and the passionate vocals sounds simply great. It's a worthy final (regular) track.

Finally (reason no. four) the production conveys a scary underground feeling. Of course, black metal is underground per se, but here we have the underground of the underground, so to say. This does not mean that one has to fear a powerless demo sound. But the guitar tone has these irresistible vibes that give true (sorry for this adjective) black metal its misanthropic nature. Thus, I can recommend Night Of Uralic Storm wholeheartedly. I admit that I needed a little time to feel the real inner strength of the music, but it was a good idea to listen to the songs again and again. So, let's see where I can find further albums of this project and more great tracks like, for example, the pretty vehement 'Under Lunar Spell'.