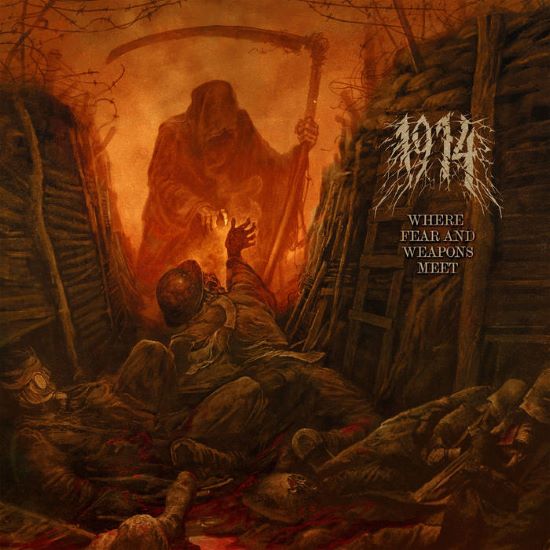 Within a quite regular period of three years Ukrainian WWI nerds 1914 release two of their albums. After their sophomore album The Blind Leading The Blind which made the band quite popular to a broader public this October they came back to the front with Where Fear And Weapons Meet. The expectations were pretty high – but can the band continue their unique style and deliver another strong album?

First of all, having a look at the artwork and the booklet, the used style is being continued. A dark cover, again with the reaper haunting soldiers (this time in a trench) is inviting the listener to a desperate and dark trip into the European battlefields of the early 20th century. The booklet underlines the atmosphere; the band uses a lot of original pictures from that time to tell not only a story with the lyrics but also with some matching photos. It all shows that the band really got into it and wants to present a very complete package and put a lot of energy into it and so you also can hear in the powerful and strong production.

Musically the listener is taken into the oppressive atmosphere by an intro sung in Serbian (at least I think so) that is taken from the WWI recordings archive. Right after that all hell breaks loose. ‘FN .380 ACP 19074’ is so to speak the reason for WWI. It was the pistol with which the Yugoslavian nationalist Gavrilo Princip shot Archduke Franz Ferdinand and caused with this the chain reaction the led to one of the greatest tragedies in the history of mankind. The track is a fast, hateful song combining typical black metal blast beats and deep-cutting riffs combined with bombastic orchestral arrangements. The next track starts with a very sinister death metal riff to tell the story of Filip Konowal who was a highly decorated Ukrainian Canadian soldier. Staccato-like guitars witch catchy riffs combined with hateful vocals characterize the track and make it one of the highlights of the album (but there are many highlights in my humble opinion). The next tracks combine these epic melodies that we could hear in the first track with more blast beats and black metal riffing and doesn't lighten up the atmosphere but keeps it dark and desperate. In the 6th track the battle smoke is blown away by a harmonica and some country sounds only to judge a guy who didn't want to fight for the Kings army. A very thoughtful text indeed and I guess this one shows very well the madness of war and the involved nationalism or whatever leads to this. The track is performed by Sasha Boole who also took part in Nergals country-oriented project “Me And That Man”. Next track ‘…And A Cross Now Marks His Place’ is quite a tenacious doomy track with some faster intermezzos with a guest appearance by Nick Holmes (he growls and sings). I would suspect that the melodies are a little bit influenced by old Paradise Lost. Another very catchy track I really like (and not because of the German title) is ‘Mit Gott Für König Und Vaterland’. A very fast and crushing track that somehow reflect the fierce attitude my former countrymen fought against their opponents (in this case the terrible archenemy France). Blastbeats and harsh riffs dominate the track and the angry pronouncing by Hauptmann Ditmar Kumarberg enhances this really hateful atmosphere. Finally, the album closes with the outro ‘War Out’ – somehow logical when got stumbled into this musical battle with ‘War In’. The smoke has lifted, Western Europe lies in ruins - hooray the battle is won, everybody has lost – may the next war come 21 years later and bring even more suffering across the world. What did Skyclad once ask – What did we learn in history lessons? I guess the answer is quite difficult looking at the world today.

If you like the combination of death, black and doom metal and have an interest in history you should really check the album. It is worth listening to it and even the lyrics are quite interesting, too. And to catch up my initial question - I think that 1914 were definitely able to top the predecessor with Where Fear And Weapons Meet.