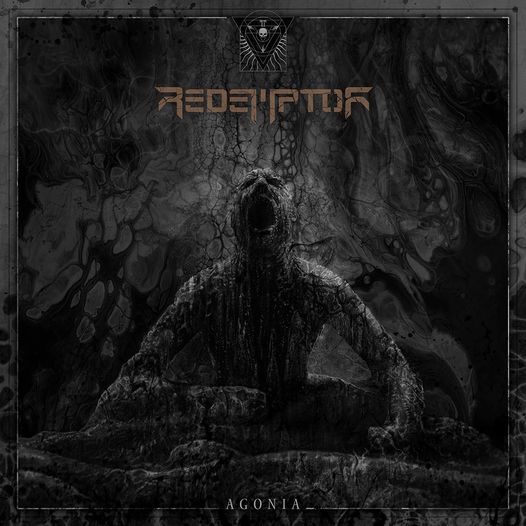 Agonia is the third Redemptor album that I have sat down to with great pleasure trying to interpret it verbally. The second, not counting The Becoming, published by SelfMadeGod Records, and the fourth in the band's discography. The album consists of 9 tracks of grim and heavy death metal, in which the element of technicality is only a complement to its dark story.

For the 20th anniversary of the band's existence, Daniel and Michał, supported by Hubert, Kamil and Daniel, prepared for us an album, which in terms of sound is a continuation of Arthaneum, but its pace and atmosphere will bring listeners to regions where life and death meet, i.e. agony. The tragedy of the city at the foot of Mount Vesuvius became the background and the theme of the album. As in Pompeii where the volcanic material recorded death, so on this record sadness, pain, suffering and death emerge from the sounds. Low tuning and a slow tempo increase the feeling of dread, suffering and the inevitability of the ultimate. Although Redemptor slowed down musically as much as they could, thanks to many explosions of guitars and cannons of the drummer they've managed to keep Agonia in the convention of death metal, only grazing on doom / death.

Do you remember Immolation's "Atonement"? How they rolled, what lows they generated but the Americans had moments of excessive repetition of motifs, which made the album boring despite its power. Here, each piece overwhelms with its heaviness but in a different way. Redemptor, like a tour leader, lead the listener through this city steeped in death. Recreating 9 images of human destruction, they show how the last rays of hope burn in the hellish flames of the lava. While death can be tuned, Redemptor woven into each song decorative but still dark melodies, solos or progressive accents as in 'Potion Of The Skies', 'Excursus Ignis', or 'Debris'. On the other hand, songs such as 'Further From Ordeal' or 'Les Ruines De Pompei' are specific models of how many emotions can be conveyed by playing slowly but massively.

Holding this CD version in my hands, I can confirm that SelfMadeGod has made every effort to ensure that the quality of the goods is in line with the musical layer. As usual, Michał contributed to the high final quality. His artistic abilities allow us to see this pain and the threat of death from centuries ago, which can be so relevant today. I do not know who is the originator of the quotes of famous personalities such as Woodrow Wilson, Ptolemy, John Milton and others, but it was an excellent move to introduce the listener to the atmosphere of the song with these few lines.

I can confidently recommend this item to everyone who is familiar with strong sounds, and who would like to know the timbre and sound of agony. Although technical death metal is a difficult and heavily exploited matter, Redemptor proved once again that without causing a revolution in the genre, you can still create interesting albums.