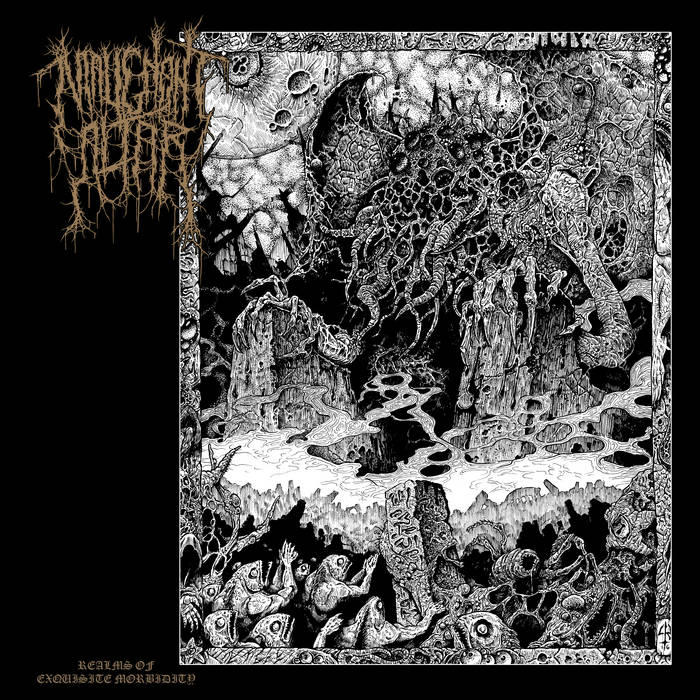 It was through Oceans Of Slumber's 2018 album I discovered Malignant Altar. Without delving into that album much, let's just say Dobber Beverly's performance on the drum kit was too damn good to not investigate what other bands he was associated with at the time. Did some research and found out he was also the drummer for a death metal band under the moniker Malignant Altar. There were even a few videos of the band's live performance on some media platforms that appeared very promising. Now to my utmost surprise and elation, I read they are putting out their debut full length album through Dark Descent Records. Yes, there's no doubt that Mr. Calvert heard the sounds too and recognized greatness instantly. Having only heard raw, live recordings of their music, only wonders of what can be achieved surfaced.

And here is the final result, Realms Of Exquisite Morbidity, a well above average, maverick makeup of death metal. Who would have determined otherwise especially when possessing the ranks of Dobber on the drum kit along with a vocalist who dominates in his field and guitarists+bassist able to feed off each other energies to write joyful riffs and create memorable breakdowns. Malignant Altar make listening to this genre of music a joy even when being exhausted from the overwhelming number of promos in the mail. It feels so relieving to know that there is something sitting in my inbox that isn't just another death metal album but a true effort. To contrive something that brings you back to the first moments of discovering death metal and that wowing moment when you hear the sounds; not many bands can do that, especially a new unit in these times, and even ones that are well established in the genre, and here's a fine example of an item that surpasses the faint attempts of countless others.

The individual performances on Realms Of Exquisite Morbidity have a consistency that compels you to revisit the record time and time again, however what truly sets this album apart from the rest is its fluidity and how it's formulated. Malignant Altar made a statement early on, with 'Channeling Impure Apparitions' flaunting some serious drumming gymnastics and riffing amidst a loud and hooligan-esque fronting vocalist. A very imposing presence created from its ominous melodious ringing inception, making it clear that Malignant Altar are here to collect bodies. The fun intensifies and it’s showtime when 'Usurping The Pantheon Crown' hits and the sprinting double bass from the kick drums begin to shake things up. Fairly mid paced but has an expansive feeling provided the rhythm changes on multiple occasions.

The turning point on Realms Of Exquisite Morbidity takes place with what would be the best track from my perspective, 'Belial Rebirth', which highlights the awesome chemistry the musicians involved in crafting the album have. I deem it as such due to how eclectic and well calculated the recordings begin to sound. Each musician knows his role and plays as though it's the only thing that matters, and you hear the sudden outburst of instrumental skill change the face of the album; reshaping what would be a more than decent entry to a musical marvel. From the flaring drum technicality of Dobber, to the soothing solos, timeless rhythmic transitions and atmospheric undertones and overtones, the chemistry shared in Malignant Altar stands unshakable for the remainder of Realms Of Exquisite Morbidity and introduces the listener to an ecstasy of musical mobility. Bringing me to a main point of this album's success; the chemistry shared among the musicians here is definitely a key factor responsible for this. They understand a band requires compatibility and more-so, cooperation; hence the flow of the album is so, unified.

With 'Ceremonial Decapitator' and 'Rite Of Krasue' putting the final and most exquisite touches on the record, you feel as though having shifted into a musical firework parade as the two mentioned songs would continue with compositions just as strong as or stronger (depending on your interpretation) than 'Belial Rebirth', thus bringing Realms Of Exquisite Morbidity to a convincing conclusion.

Should Malignant Altar head into the studio to record another album, they should consider keeping the same lineup as this one. They have a unit that gels well, and should one be replaced, it could potentially jeopardize their future death metal recordings.