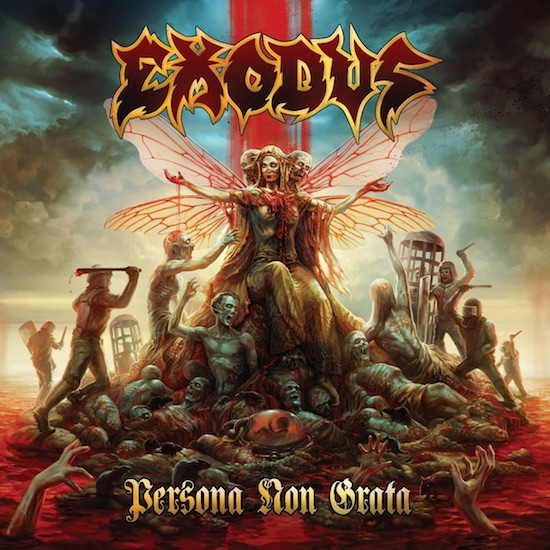 In Germany we know the nice word "schönhören". It means to listen to something bad again and again until you think it's good (although it is, of course, still bad). One can vary this phrase. For example, "schönsaufen" is the word for drinking so much alcohol until you think the lady in your arms is Miss World (but in fact you would not even ignore her if you had any alternative). However, the fanboy in me was in fear when it came to the new Exodus album. Prophylactically, I switched into the "schönhoren" mode. But lo and behold, this would not have been necessary at all. Persona Non Grata is anything but a disappointment. Okay, I don't think that a Latin title is a good idea for a thrash metal record and the cover is as bad as the one of Blood In, Blood Out was. Is there anybody willing to steal Pär Olofsson's brushes? Has Ed Repka died? Or why didn't they take another casual band photo, remember Pleasures Of The Flesh and Fabulous Disaster. But the music, my friends, the music...

The title track starts with 'Scar Spangled Banner' riffing and kicks off the album in a furious manner. Don't get me wrong, the riff does not copy the one of the aforementioned classic. It only spreads the same vibes. Just like brothers, these two tracks show some similarities, but have their own personality. And their father, Gary Holt, did not only give the opener of Tempo Of The Damned a baby brother. He knows the success formula of thrash in general (because he was one of the inventors) and of Exodus sounds in particular (this needs no justification, I hope). And so we see that inter alia 'The Years Of Death And Decay' stands in the tradition of groove monsters like 'Blacklist' or 'Shudder To Think' and 'The Beatings Will Continue' is the new 'Thrash Under Pressure', while 'Nanking' sits at the cradle of the atmospheric yet mega heavy 'Prescribing Horror'. Speaking of some songs of the Rob D. era: this jerk was not involved in the making of Persona Non Grata and that's a good thing, but Rick Hunolt, once part of the H-team and co-author of perfect tracks like 'A Lesson In Violence' and 'Deliver Us To Evil', appears with a solo in 'Lunatic – Liar – Lord' and background vocals. The same applies for former live guitarist Kragen Lum. Only Paul Baloff (R.I.P.) is unfortunately missing. But Zetro makes up for that with his powerful, sometimes somewhat hysterical, sometimes very ominous shrieking.

Two songs fall by the wayside. 'Elitist' is a mixture of a dull, late Venom song (verses) with a Skyclad-like melody afterwards. 'Clickbait'… well, even Gods fail sometimes (otherwise Jeff Hanneman would be still alive). It's clearly an Exodus song, but unfortunately one of the least exciting ever with a chorus going nowhere. It doesn't matter, because the overall picture shows a strong, robust and honest metal opus. Exodus have made their peace with their existence as a thrash metal band. No Force Of Habit absurdities shimmer through the songs, commercial success is not an end in itself. Instead, we get typical "good friendly violent fun" from a band that does not run out of ideas during the playtime of 60 minutes and 24 seconds. 'Lunatic – Liar – Lord' scores with massive complexity, the casual yet vigorous 'The Fires Of Divison' holds great double bass sequences and the straight 'Antiseed' marks the final riff massacre. These songs form a very cool last quarter of the album. And needless to mention that they all benefit from the precise drumming of Tom Hunting. Thank God that he could defeat f**king cancer! This gives the album an ever better aroma.

The quality of the production always influences the flavour of a release as well, that’s a matter of course. Well, producer: Andy Sneap, company: Nuclear Blast. Do you really need more information? Persona Non Grata does definitely suffer from a lack of imperfection, to say it this way. Thus, some people could think the mix borders on sterility, but I like to disagree. There is so much vibrancy in the new material of this still agile quintet that we really cannot speak about a bloodless result.

So let’s come to the conclusion. Persona Non Grata consists of two fillers, a short intermezzo (outside the rating) and nine tracks that reflect the thrash metal DNA of each and every band member. These nine songs lie in very close proximity to perfection and it's a bit sad that the overall result is lowered by the two less strong tracks. 50 minutes plus would have been enough music as well and a 95 + X rating would have been the consequence. However, the vast majority of the songs hits the shit out of my rotting brain. If I would be forced to define my personal highlight today, it would be 'R.E.M.F.', even though I am not totally happy with the lyrics. Already Turbonegro knew "Don't Say Motherf**ker, Motherf**ker". Either way, tomorrow maybe I prefer 'Slipping Into Madness'? Or 'Lunatic – Liar – Lord'? 'Prescribing Horror'? Time will tell, but one thing is for sure in my humble opinion: this is the best album from the US of A for years! No need for "schönhören"! Exoduuus attack!

I would say that Persona Non Grata is one of the highly anticipated albums in 2021. I would also assume that this album will lead to a lot of controversies because of its sound, songwriting, running-time, cover and God knows for what other reasons. So, what is coming upon the listener? Is it more mediocre stuff like some people said about the pre-listening songs or is it going to be a killer? Well, I will try to answer these questions now.

The album consists of 12 songs with a total running time of 1:00:18 which is much shorter than the previous Exhibit… albums (okay they both had their lengths; I have to say). The production sounds like on the last albums: flawless, powerful and full. The cover… (just write down your thoughts here).

Persona Non Grata starts with the title track which was already released as video a few weeks ago and that song hits you in the face from the first second. Aggressive riffs in the typical style of Exodus with blasting drums together with Steve Souza striking voice makes you feel that you are the person he is singing about. His vocals are quite varied and sometimes even go a little bit into death metal range (not only on this track). Though I have the impression that the vocals sometimes sound a little bit chopped, it is a very good and brutal track. What is the red line on this album are the groovy, melodic parts and the great guitar solos performed by Gary Holt and Lee Altus (I wished that the latest Heathen would kick ass so much!!!) combined with a lot of anger and hate (I love it when Steve screams “motherfuuuuuuucker” in 'R.E.M.F.'). But I won't talk about every song in epic length but will go more into the album as a whole now.

Well, not everything on this album is good old Exodus stuff, no; they put additional elements into their tracks they didn't do before. It is not really modern stuff but for example in 'Slipping Into Madness' some slight country melodies snuck into the opening riff and the bridge (and a fully country vibe in the instrumental 'Cosa Del Pantano' which is a cool intro for 'Lunatic Liar Lord'). It takes a little to get used to but it fits quite well into the track. Another element is spreading a gloomy and tensioning atmosphere through creeping, sinister melodies that let you expect that something exciting will happen in the next seconds (just listen to 'Prescribing Horror' or the mid part of the aforementioned 'Lunatic Liar Lord'). What was my thought on some tracks is that they put some Iron Maiden reminiscences into them, at least the lead guitar in 'The Years Of Death And Dying' in the chorus sounds a little like that. Not too much, just like the parents in Hansel and Gretel threw a few breadcrumbs here and there. You need some time to discover it, but maybe you will agree with me. Besides, the solo and the breaks in that track are really awesome. And finally, Zetro tries (I mean tries) to sing ('Elitist') which sounds very interesting and not really bad – I guess that is one of the biggest surprises on Persona Non Grata.

For me, the most outstanding tracks are the really groovy catchy tracks we all know from Exodus. I don't like it too much when the band applies the parking brake (metaphorical of course) as for example Death Angel on “Relentless Retribution” did but that is my very own opinion. These tracks are in my ears 'Elitist', 'The Beatings Will Continue' and 'The Fires Of Division' which are pretty old school, pure fucking Exodus tracks that leave you beaten down to the ground but very happy in front of your stereo or wherever you listen to the album.

There are some tracks that you've already heard somewhere ('Clickbait') and some tracks have their lengths and should have tightened up a bit ('Lunatic Liar Lord', 'The Years Of Death And Dying') but I think all in all Exodus recorded a very good album that will get into my favorite 10 thrash albums of 2021 (fuck, this year is almost over, isn't it?). However, the cover...