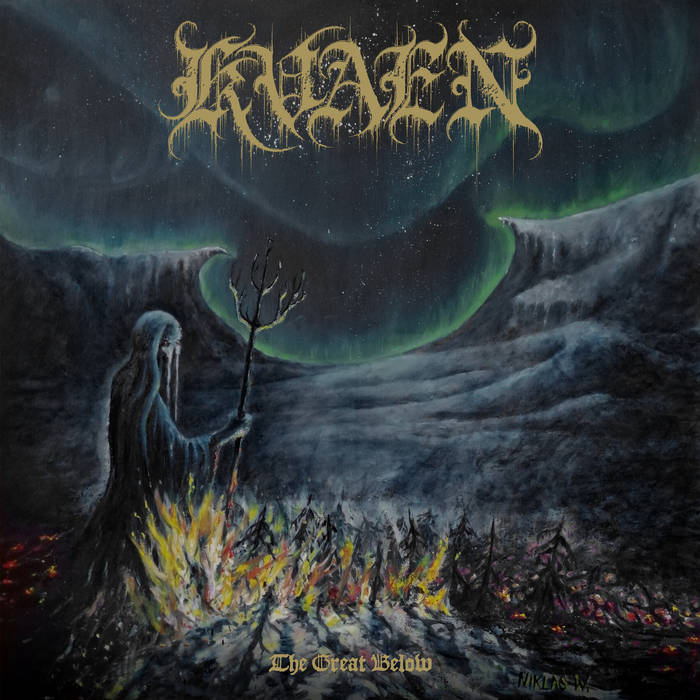 The Funeral Pyre was one of the biggest surprises in the melodic black / death metal scene in 2020 because of its fierce but nevertheless quite harmonic melodies so I was very much excited when I got the news that Swedish one-man project Kvaen (with Jacob Björnfot (ex-The Duskfall) behind it) is going to release another album called The Great Below. Jacob Björnfot created this album together with session drummer Tommi Tuhkala and just like he had on The Funeral Pyre he has a lot of guest appearances on this album of course. This time around he's got an illustrious guest list incuding Mathias “Vreth” Lillmåns (Finntroll), Angus Norder (Witchery), Sebastian Ramstedt (Necrophobic), Mike Wead (King Diamond) or Jeff Loomis (Arch Enemy, ex-Nevermore). That sounds quite promising in my humble opinion.

But now enough of the namedropping, let's check the physical album for real: northern lights and a somewhat demonic person staring at a vast northern landscape on the cover invite the listener to the musical journey and I have a feeling its going to be a real wild one. The album starts with 'Cauldron Of Plagues' which is a very fast and aggressive beast. The guitar leads are in the style of the good old 90s Swedish black metal and the drums are fast as hell. Jacobs vocals sound very aggressive and pissed-off. The atmospheric keyboards create a very unique atmosphere though and this won't let you down listening to the album. Though I don't want to go on track by track, I have to mention the second piece which is also the title track. If you know the guitar work of Jeff Loomis, you can clearly recognize his participation on this song from the very first second. I guess his guitar solos really fit perfectly into the track which is also very fast paced and catchy. From its general structures it reminds me quite a lot of 'Revenge By Fire' from Kvaen's debut. There are some more of these fast tracks in the Dissection style on the album which are really impressive. 'Your Mighty Has Fallen' convinces with nice breaks and tempo changes and 'The Fire Within Him Burns' appears with a nice piano intro / outro and a very casual guitar solo that may be inspired by some classical compositions.

But Kvaen also shows a second face on The Great Below. Sometimes they make a halt and focus more on a dark atmosphere like in 'In Silence' or 'Ensamvarg' (“The Lone Wolf”). Both songs come along very oppressive and threatening and make the album even more varied. The guitar leads, the tremolo picking and the acoustic part in 'In Silence' sound pretty brilliant and feature the backbone of these tracks. 'Ensamvarg' is even more outstanding because of the very epic keyboard sound that emphasizes this special atmosphere.

The lyrics are also really worth mentioning. They became very dark on this album (which of course matches perfect with the music) and they have lots of personal meaning. So if you are interested in discovering more about words on this album, it is not only about the dark and evilness but it also has a quite metaphysical level that one may find here, too.

I dare to say that there are no fillers but only killers on this album. When listening to it I always wonder how is it that the album is already through after such a perceived short time (total running time is 39 minutes) and so I have to admit that the music is very diverting. I think that all the compositions are really thoughtfully arranged and that the band did a top album in that musical style in 2022. I would say that this is an essential album for all black /death metal fans out there!