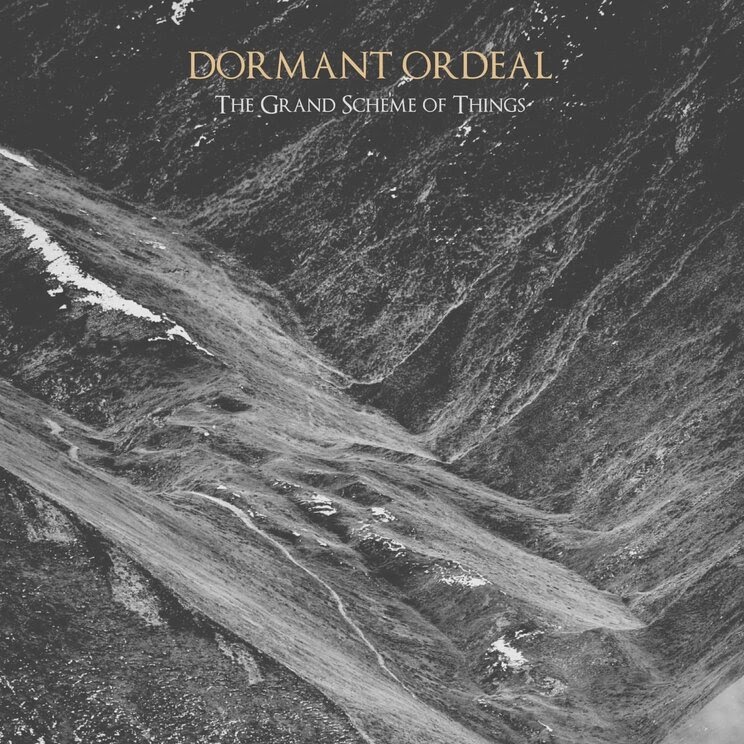 Buy on: Bandcamp
Type: Full-Length
Release Date: December 3rd, 2021
Label: SelfMadeGod Records
Genre: Death, Technical
1 At The Garden's Gates
2 Poetry Doesn't Work On Whores
3 Bright Constellations
4 Here Be Dragons
5 Letters To Mr. Smith
6 Let The Light In
7 Sides Of Defence
8 The Borders Of Our Language Are Not The Borders Of Our World
MetalBite on YouTube

I came across Dormant Ordeal over 7 years ago at a charity concert "Help Artie" (a Belarusian musician known from: Thy Disease, Disloyal, Deathbringer). The concert was moderately successful, as the audience strangely disappointed, but musically it was much better. It was then that I found out with my own ears what the band's skills and potential were, but the unknown was their determination and perseverance. Now I can enjoy their third album, which was released thanks to SelfMadeGod Records. The Grand Scheme Of Things is made of eight hyper-energetic pieces of technical death metal, which from the first to the last track create a sonic bomb waiting to explode.

The new album, once again, was recorded and mixed in JNS Studio under the watchful eye, or rather ear of the well-known Paweł J. Although the band has not changed the studio and is still wandering the same hazy and not very encouraging areas, it sounded slightly different this time. It seems that this fast, slightly eclectic death metal has been squeezed into a too small of a box and is waiting for the PLAY button to be pressed, which will cause these brutal sounds to explode. Fresh and condensed, and at the same time clear sound, reflecting what this genre is proud of, i.e., BRUTALITY. The pace is ruled by Radek (drums), who, like a hungry cheetah, drives the speed of the whole band close to the breaking point. Even in the slower moments, which are few on the album, he forcefully manages (in a way) the chaos that he has caused himself. He somehow survived the studio session, but how will he survive playing live setting? I hope I will have a chance to find out. Nevertheless, great respect for this unbelievable, almost machine-like handling of the drums.

The publisher whilst writing about the band, mentions the names of: Morbid Angel, Hate Eternal, Hour Of Penance, Fleshgod Apocalypse, Ingurgitating Oblivion. I would also add Cattle Decapitation when it comes to motorics, and guitar work is definitely the closest to the early Decapitated and Ulcerate. The intelligence of the built melodic lines does not deprive the music of rapacity, and at the same time facilitates its digestibility. In technical death metal, the form often exceeds the content, but not here. Dormant Ordeal know very well which limits should not be crossed. Despite the audible influences, everyone who knows all 3 albums of Dormant Ordeal will say that they have already built their own death metal world, in which the fury-charged sound comes with the real message contained in the lyrics. The rest, i.e. media hype and glitter, are alien to them. Firmly and with determination, track by track as if built brick by brick, they build a wall to cut themselves off from all the filth with which the present world is permeated. To take shelter in the shade of trees and shout out their story. I do not see them as revolutionaries, but thanks to them I see more clearly that we build our own hell every day, one to another. There is no greater beast than a human, so not everyone should be invited to your home, but Dormant Ordeal is the beast that is always welcome, it stayed in my headphones for a long time and will certainly be back in the future.

Perhaps, while listening to their music, you will not feel Lucifer's own breath and you will not drown in a sea of blood, but you will taste a different form of evil and death. It is already almost natural feature of Dormant Ordeal music that there is an appetite for more they leave behind. The technicality of their death metal does not tire. The sound is not “meaty” but draws in with its intensity. It kicks ass. When I hold their third album in my hands after listening to these exploding rhythms, I can hope they won't run out of strength and determination for more releases.

I will keep saying over and over that Polish death metal is incredibly powerful. There are several names in each subgenre that either inspire or should arouse recognition and respect. Now Dormant Ordeal is also an important cornerstone of the technical flank.