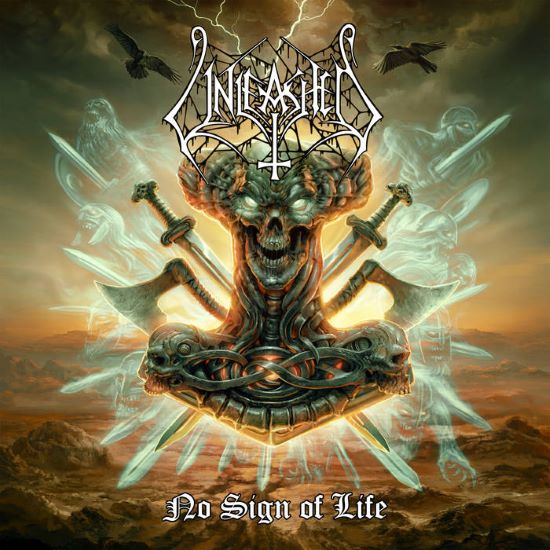 Type: Full-Length
Release Date: November 12th, 2021
Label: Napalm Records
Genre: Death
1 The King Lost His Crown
2 The Shepherd Has Left The Flock
3 Where Can You Flee?
4 You Are The Warrior!
5 No Sign Of Life
6 The Highest Ideal
7 Midgard Warriors For Life
8 Did You Struggle With God?
9 Tyr Wields The Sword
10 It Is Finished
11 Here At The End Of The World

I guess that Unleashed don't need a detailed introduction and writing one would be a little bit like carrying sand to the beach. The Swedish death metal veterans will release their 14th album No Sign Of Life on November 14th, 2021 and within the last 30 years they've never really changed course in their way of playing death metal (okay with some slight exceptions) so, I would be very surprised if we find something totally unexpected on the new release. Only the question if they are able to keep up the quality of its predecessor The Hunt For The White Christ remains now.

To start with the cover – all remains quite similar to the last album. A great painting showing the band logo combined with Thor's Hammer and the two ravens Hugin and Munin which emblazons over a barren landscape. I have to say that the latest cover by the band is all very lovely designed and very colorful so that even if only taking a quick look at these it is still quite fun.

The album starts with a lot of rage. Fast and catchy 'The King Lost His Crown' gives much better access to the album than I had with the opener for The Hunt For The White Christ. In this track you can find all the trademarks we are used to know from Unleashed – thundering drums, the sawing riffs and Johnny’s barking voice. The following tracks are kept in the same style ('The Shepherd Has Left The Flock' has a very cool distorted riff at its beginning) and come along with a very nice groove. Listening to the album several times I had a feeling that Unleashed waived some guitar solos and put more straightforward melodies into the tracks (okay, 'Midgard Warriors For Life' is an exception, in my opinion the guitar play here is one of the best the guys ever did) which makes the songs not that bulky as it sometimes was on the last album. You can find a lot of groovy parts in the songs ('Where Can You Flee') which reminds a lot of older Unleashed releases like Victory. You can also find some more creepy, sinister-touched melodies that crawl slowly into your ears and tell you to grip your axe and go out to chop some ehh… wood (listen to the start of 'You Are The Warrior'). 'The Highest Ideal' is a very good example for the fact that Unleashed didn't really left their path within all these years. Mid-paced death metal with repetitive riff that makes you feel like you're back in the 90s when the Swedes had their most glorious days with Where No Life Dwells and Shadows In The Deep. One of my favorite tracks is 'Midgard Warriors For Life', a very groovy track with galloping pace and a very cool vocal performance by Johnny. I love it when he screams “Aaaaahhh” - that makes the track quite rousing in my opinion. I guess if Manowar would have made death metal, this would have been a track they could have written (a fool who may think I'm writing this because of the title!). The already mentioned guitar solo is the cherry topping on that great track. Another very convincing song is 'Did You Struggle With God', okay it is composed quite similar to 'Midgard Warriors For Life' but I think that these catchy tracks you can easily listen to were and will always be the trademark of Unleashed. The rest of the album is also really solid death metal with a quite fast and neck breaking track called 'Tyr Wields The Sword' and two more mid-tempo stompers that will leave no Unleashed fan unsatisfied.

I would assume that the quartet didn't want to invent anything new on this album and I also don't see any reason for doing that after all these years of success and acknowledgement through the scene. I guess the album is a very worthy follow-up to The Hunt For The White Christ and so please don't take the title No Sign Of Life too literally for the new album, Unleashed are still very much vital and alive!!!