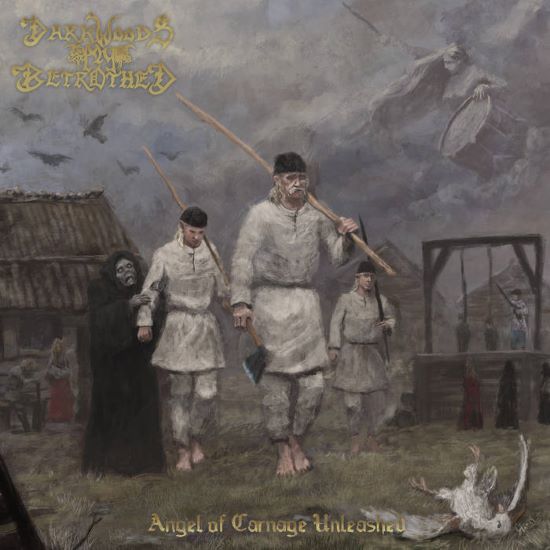 Wow, that was quite a surprise to me when it was announced that Finnish black metal fossils Darkwoods My Betrothed would release another album and it wwill be called Angel Of Carnage Unleashed. I had to read this news at least two times to believe this. I still remember when their hateful and quite unique demo Dark Aureoles Gathering came out in 1994 and I also remember that I loved that one. Also, the follow-up albums Heirs Of The Northstar, Autumn Roars Thunder and Witch-Hunts were pretty solid stuff although they changed from sinister frosty black metal to more symphonic style with some clear vocals in the tracks. Now this announcement happened and what even caught more of my attention was that Tuomas Holopainen (yep, the keyboarder in Nightwish) joined the band. It is something that only can go wrong, isn't it? So, I listened to the album the first time with the feeling that this can only become a cock-up and with that no real high expectations (maybe some Nightwish doodling???).

After some turns of listening, I have to say that I am sorry about that. After a short church organ intro (a hymn by Martin Luther originally chanted by the Swedish army before going into the battle – “Our God Is Our Fortress”) Darkwoods My Betrothed play very harsh and old school black metal with these guttural and hateful vocals Emperor Nattasett used to perform on the predecessors but also the deep clear vocals he used to sing on Autumn Roars Thunder or their side-project Nattvindens Gråt (besides, here was Tuomas Holopainen involved, too). Here and there some more symphonic parts (with female vocals like in 'In Evil, Sickness, And In Grief' are integrated but this never appears to be kitschy. The riffing is quite straightforward and very catchy and the melodies know how to grab the listener. I never get the feeling that the band gets lost in some arrangements and the tracks aren't overloaded with any unnecessary song arrangements.

I have to say that Angel Of Carnage Unleashed keeps the spirit of Finnish symphonic black metal quite alive. The sawing guitars are quite relentless, and the powerful drums make the album a really impressive release. The keyboards are used in the right moments and create a very dark and atmospheric mood. This means that you don't have an album that only lives from sheer black metal rage, but you get some very nice surprises within the songs. Boredom won't appear while listening to this release because the tracks are so much varied that it is really a joy to be confronted with the album. The best example for this is 'In Thrall To Ironskull's Heart' (Spoiler alert!! If you want to experience the release on your own, please stop reading now.). What starts as a quite soft ballad (and I thought it would stay this way) turns into a very epic track with a galloping melody. Manowar meets black metal so to speak. Another outstanding track is 'Where We Dwell' which appears quite symphonic and catchy but also threatening and gloomy. The harsh black metal vocals are quite a remarkable contrast to the very melodic keyboard melodies which are the red line in this song. 'Massacre' however is a pure, furious and hateful black metal track that brings the inferno after a short keyboard intro. I didn't expect such a fast and evil track on the album.

Angel Of Carnage Unleashed is a very strong comeback by a much-underrated band that makes the upcoming long and dark evenings this autumn and winter even darker. Light up a candle, light the fireplace, open a bottle of red wine and enjoy Darkwoods My Betrothed. Oh, and before I forget it, check the lyrics, they are based on some Scandinavian historical facts.