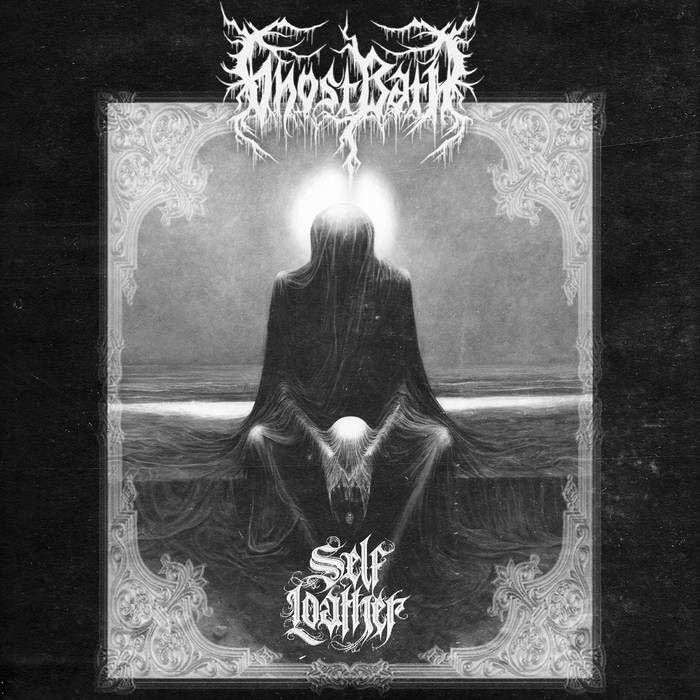 I thought Ghost Bath were done after their last record crashed and burned as spectacularly as it did. They did seem to slither away into the shadows for some time. Maybe Dennis Mikula thought the metal world had rejected him and his band. Maybe he chose to fade out into the foggy dismal midnight mists of forgotten misfit bands, never to be remembered beyond having any albums that hovered beyond that ever omnipresent "decent" status. Oh, and their little China stunt. That'll never get old.

I wasn't particularly fond of Starmourner. A few songs grabbed me but, the ones that did were mostly absent of Dennis' vocals. Meanwhile, each song that did feature vocals, the quality dipped exponentially to the point where the song was flat-out ruined for me. Not even the ones that had pretty interesting riffage could save them from bottoming out. While a small handful of songs managed to capture me, it was a bad album hampered severely by poor songwriting, unengaging riffs, bloated length, and, of course, castrated baby screams for vocals.

Perhaps I'm being a touch too harsh. Ghost Bath aren't the worst band ever. Far from it. There are way worse black metal bands out there. Bad, uninspired, generic, bland second wave straddling black metal are a dime a dozen anywhere you look. For every Mayhem creating malevolent, hellish manifestations of blood-soaked grimness and evil, there's at least a dozen Nargaroths and Draugars out there in various forms polluting the genre. While I was unfavorable with this band's previous LP, snippets of their, at the time, unreleased new album, had surfaced and my ears perked up with curiosity. Perhaps this will be the album that would win me over to become a fan of Ghost Bath. Did it work?

The difference between Self Loather and Starmourner is stark and immediately noticeable. From the opening track all the way until its closing notes, the change in atmosphere will be the first thing noticed. Shades of dark despondence have leaked in and corrupted whatever sort of wispy ethereal somberness that gave the last album whatever colors it had. There was a sort of sorrowful, yet yearning humanity there with its ghostly night sky shimmering hauntingly over black mountains that graced that album cover. This album, on the other hand, has taken whatever colors were in Starmourner and bled them all dry until naught but only a pale white soul draped in black remained. It is dismal, depressing, soul wrenching with terror and hopelessness. Upon unleashing its gloomy and ravishing opener 'Convince Me To Bleed', the band start off strong down the winding road to abysmal blackness and just drives deeper into it with songs 'Hide From The Sun' and 'Unbearable'.

Diversity is the word of the day for this album. The songwriting here has taken a massive step up from their previous work. More emphasis is placed on a more traditional second-wave black metal sound than ever before. There's much more of the tremolo picking and blasting that typifies the Scandinavian second-wave sound, mostly from Norway. Of course, Ghost Bath hasn't fully abandoned the post-black metal that defined their sound early in their career. There are still jangly acoustic parts, a pretty piano ballad makes its way in, and even a cello, piano, and violin combo in the second half of 'Sanguine Mask'; but most of those bits have been truncated to make way for a much blacker, slower outing that feels like early Woods Of Ypres meets Taake meets Harakiri For The Sky with a hint of Strid: a melting pot of shivering, depressive hatred and self-loathing.

Unlike past albums where only Mikula was doing all of the writing (he's stated in interviews that the band was intended as a solo project with no lyrics), this one has contributions from the entire band. I have a feeling that might be why the last album was so bad. I don't think Mikula has the talent to pull off songwriting by himself. Even if that weren't true and the man was similar to Wrest and he thrived on working as a purely solo artist, when you've got other band members around you with ideas to contribute, it might be a good idea to let them in on the creative process. Song after song illustrates this from the utterly depressing 'Hide From The Sun' to the psychotic 'Sinew And Vein' to the achingly beautiful piano instrumental 'I Hope Death Finds Me Well'. Mikula's amped up his vocals here are a total improvement in every way. He utilizes the entire spectrum from wretched deep growls to mid-range screams to those horrible bellows. Yes, those are still here but, they're not in for forefront for 90% of the album anymore. They were given a cozy spot in the background where they belong and that makes me happy. The guitars here are fundamentally better here and played with much more dynamics and cohesion as the three men who share guitar duties work together to create some amazing solos, rhythm passages, and leads. There's strength in numbers and it's good to hear that all five of the men participated in the songwriting process this time because it led to some of the best songwriting this band has ever done.

Perhaps to its detriment....

This album, for better or for ill, is incredibly depressing sounding, even for Ghost Bath. There's a sadness to this album that is kind of distracting. It wallows in its misery so damn hard that it feels like a task seeing it through to the end. Mikula's stated in interviews that the title, lyrics, and overall tone of the album was directly inspired from the depressive feelings and self-loathing he was experiencing during the course of writing it. I can listen to similar bands like Abyssic Hate or Make A Change... Kill Yourself, bands that deliberately go out of their ways to submerse the listener in intense feelings of abject emptiness, self-hatred, misery, and pitch-black depression and not really feel like I've experienced any similar emotional pangs. This album does a number on me by the time the second song hits with those wails and I feel more uncomfortable than I've ever felt. Even though the song is good, it leaves me feeling scared, helpless, and anxious by the end. It kind of makes me want to turn the album off. Whether that's good or bad, I leave up to you but, for me, it ruins the experience by having to skip a song, thus lessening the impact.

I kind of had the same issue with Bethlehem's "S.U.I.Z.I.D.". That album put on a masterful show of tortured agony, but it was more than little bit tough to listen to the end the first time around. I feel the exact same problem here, except I've listened through it at least three times now whereas "S.U.I.Z.I.D.", which I bought years ago, is way easier to sift through than it was at first. Maybe acclimatization will arrive for me in a few years and a few dozen listens with this album but, when songs like 'Hide From The Sun' exist, I'm not sure that day will ever come. So, to answer my question, this album has officially converted me into a fan of Ghost Bath. It's made me feel good about what the band will do going forward. All I ask is one thing from Dennis Mikula: Please don't ever write a song like 'Hide From The Sun' again. Those cries felt too real and were so immensely unsettling. It made me want to cry, for goodness' sake.