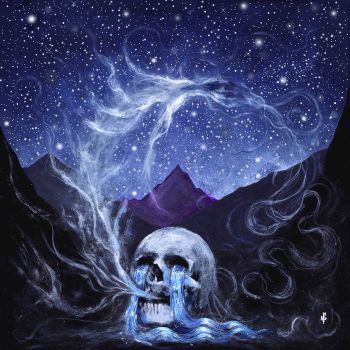 I was around when the whole Ghost Bath thing was circulating. I'm familiar with the myth that this was a mysterious black metal band from the land of the Sleeping Giant. I remember there being this eclipsing, creepy aura around this band's origin that entranced the metal community for a little while, like this band were holding their instruments covered in moss, weighted down by chains from a 18th century sunken pirate ship, shrouded in the fog of the murky, swampy forestry of the forbidden mystic parts of the Eastern land. The details of how that crafted fiction were blown wide open elude me, but I do remember being unable to contain my laughter when it broke that none of the members of the band were from China. There wasn't even the meager credibility of some of the members having relatives from China. They were all just milquetoast white dudes from North Dakota.

Prior to that rumor crashing and burning, I'd never listened to any of their music, but I was curious for the longest time what they sounded like, so I can at least give their publicity stunt some credibility, I suppose. It made me interested in checking out their music. I finally got my chance WAY down the line in 2019 when their credibility was pretty shot and they were all but written off as being an awful band with comparisons that they were a third-rate Deafheaven. Now I don't know about you, but when black metal elitist snobs say your band sounds worse than Deafheaven (who are also secretly listening to them, mind you), that's a rebuke you should probably take seriously.

I'd heard mixed things about their full-lengths prior to this one all across the board, but I wasn't going to let those reviews deter me. I was going to go in with the most open mind I could, damn all preconceptions and bias, and review the music straight. With that in mind, Starmourner, even without any expectations I'd attempted to set aside, is a pretty overwhelming disappointment.

Ghost Bath, in and of themselves, are a pretty middle of the road post-black metal band with nothing unique or special to bring to the table. With all the comparisons to Deafheaven, you'd think there'd be a pretty compelling case to draw from the well as to why Ghost Bath deserve to be placed in the same space as them. There doesn't seem to be, in my opinion. At least on this album, any comparisons drawn to the aforementioned California blackgaze band simply aren't here. What little can be gleaned is that they're both playing similar strains of the same music: tremolo picked guitars, blast beats, a usually somber and morose atmosphere driven by acoustic guitars, and an emphasis on tension, sadness and personal or private emotions. As far as atmosphere goes, Deafheaven and Ghost Bath are separated by a vast stretching chasm of ethereal blackness. The former tends to hinge their music and songs on wispy pillowy clouds with a silver lining of inner turmoil lamenting the loss of someone or something that can't be obtained, maybe a personal struggle and how to cope with it. The latter hinges their sound more on hopelessness, misery, loathing, and self-loathing with a silver lining being there's maybe some hope to grasp onto. This album, currently their newest album to date, kind of attests to the idea that there is no hope.

This album is a whopping 70 minutes long. That's problem number one. If there's one criticism I can lay at the feet of black metal, a majority of the bands I listen to create some obscenely long compositions, whether it be in the forms of eleven-minute songs or albums up to 50+ minutes. While I enjoy a fair share of long songs, a band has to be incredibly talented to craft a twenty-minute song or an album over 40 minutes to keep my interest. Ghost Bath here seem to have missed that train as it was leaving the station. There are twelve songs, half of them over five minutes, and they are almost all paced terribly. That might fly in the face of what I said a moment ago, but I have to point out that Deafheaven make their songs real long and they're all paced just fine. I don't know how Ghost Bath compose their songs, but there's something within that gives their songs this artificial length that's not needed. As a whole, this album could do with a few of its songs cut out to have its time chopped down to maybe forty five minutes.

The next issue I have is, well, the vocals. Everyone has dunked on Dennis Mikula and his horrendous crybaby vocals before this. Yes, they're just as bad as everyone says. I'll be totally honest with everyone reading this: his vocals ruin this music. Yes, you heard me. I never thought that a single vocalist would kneecap the quality of music this bad, but it has for me. I can't even tolerate his vocal performance on its own. Silencer has better vocals. That depressive black metal band lead by Nattramn, a man whose vocals were heavily criticized for sounded like a dying cat, sound better than the vocals in this band. Quite frankly, his high-pitched vocals have all but totally destroyed otherwise decent songs that I've enjoyed on this album like 'Cherubim' or 'Ambrosial', the former of which has the most poppy, catchy hooks out of every song here. Without a shadow of a doubt, the vocals are a major blow to an album that, otherwise, is pretty okay, instrumentally speaking.

In fairness to this album and the members involved, the people involved know how to play their instruments. There is some pretty nice guitar work on display here between the two guitarists and some decent parts in songs that wouldn't be all that great without them. Like the beginning minute or so of 'Thrones', where there's some nice tremolo trading in the beginning, a real solid pure black metal blasting moment there with some raspy vocals from Dennis and some really driving tremolos that keep everything engaging - of course, that's all ruined by the squealed baby vocals coming in and one guitar part dropping to make way for a really upbeat, happy sounding guitar part that feels pretty out of place. Other songs have pretty compelling parts, too, like the ending of 'Luminescence', in which the twin guitar play is really beautiful and darkly harmonic as it gently crawls to an end in its last minute. It's really a charm to listen to without the vocals interfering. Another great moment of rhythm and atmosphere comes in with the second to last song 'Principalities'. In fact, this song is probably the best thing on here. It's actually a pretty good song with real hypnotic chunks of atmosphere and a somber mid-pace. Really, it's the only time on the album that there's a compelling, engaging sense of anxiety and palpable sadness on this album to connect to as we haven't really much gotten before this.

While there are some moments of soundness on here, this album is ultimately a resounding disappointment for me. At the same time, though, I feel like I expected something much better than what I got. The comparisons to Deafheaven are definitely overblown. They don't come anywhere near being as dynamic as those guys, nor do they write songs as intense as they do. Honestly, this album is just incredibly mediocre at the end of the day and lacking in any and all dynamism and emotion that makes Deafheaven so boundary pushing within black metal. Ghost Bath just, well, exist in the same space as Deafheaven. That's about it.