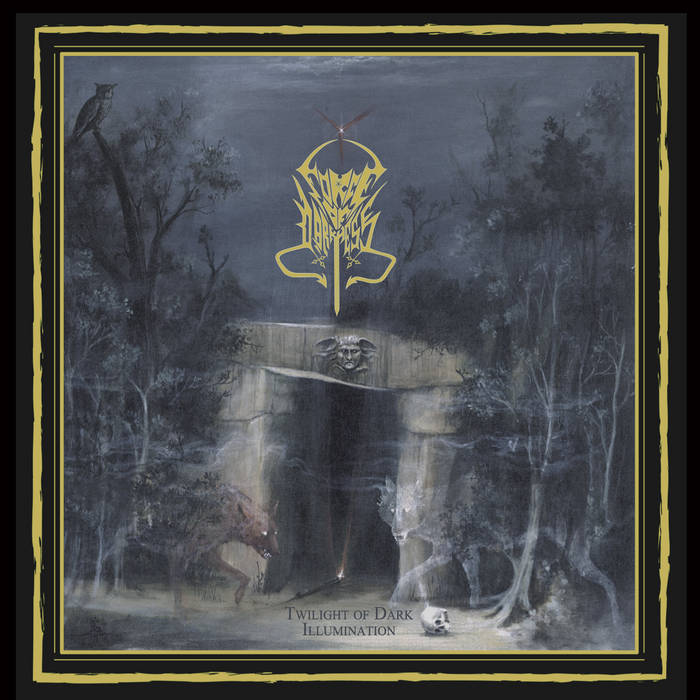 Two ghostly wolves keep a watch in front of a crypt that is surrounded by woods and invite the listener to a haunting trip into the deepest depths of what evil Chile spawned out the last years. The third full-length album by Force Of Darkness – Twilight Of Dark Illumination released via the German label Iron Pegasus is a really blackened trip into the South American and European metal history.

The hellish trio delivers unbelievably fast, relentless and neck breaking black metal which is here and there enriched with some fierce thrash metal parts. From the very start of 'Retribution Of The Crowned Chaos' the band doesn't take any prisoners and attacks immediately. No intro, no acoustic stuff, only sheer bludgeoning. Melodies are quite secondary on this release, what is primary is the speed and the savagery of the tracks. Tracks like 'Absolute Verb Of Chaos And Darkness' or 'Sons Of Hypocrisy' are just brutal, ultra-fast and without any breaks or tempo changes and let the spirit of bands like Sarcofago, Nifelheim or Volcano live up.

On the other hand, there are some tracks that are more varied with some catchy and repetitive riffs and notable melodies ('Athame's Wrath' and 'Metempsychosis') where the thrash influences from bands like Slayer (who else?) appear quite obviously. A very surprising 'Choronzon's Desire' is a slow, creeping and dark track which lives from the simple riffs and the hypnotic drums. The spoken words make it almost appear like an incantation. But the most outstanding track is the album closer 'Darkness Shall Prevail'. Here you can find all the already mentioned trademarks combined into one single track. Catchy melodies, fast riffs, great guitar solos and a lot of evil and darkness in the vocals (the title tells so…) makes it fun to listen to it because of its high recognition value. Don't get me wrong, the other tracks are fun listening to too but this one is the top-notch track for me.

The vocals on Twilight Of Dark Illumination are kept quite dark, almost death metal like which creates an additional evilness to the brutal compositions. The drums are blasting like hell; I don't know what kind of animal these guys got as a drummer but my guess is that I would never want to get in a fight with him. The guitar riffs are unbelievably fast and played very clean and the bass is kept quite well in the background but always appears when it is necessary.

If you like high speed black thrash metal like the aforementioned bands or newer ones like Destroyer 666 or Slaughtbbath this is a highly recommended album for you.