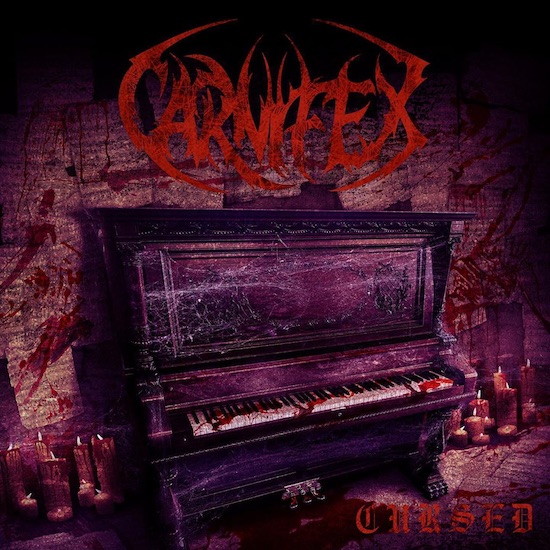 As COVID-19 continues to further upend our world, tearing away the entire fabric of normalcy we used to know, nobody is unaffected. Schools closed, concerts cancelled or postponed, stores closed, restaurants closed, movie theaters closed, streets once bustling with commotion and noise reduced to nothing more than ghost towns with few cars and people trailing them. All the while, bands are struggling to eek out an existence in these incredibly difficult times. Some are faring better than others. The Metallicas and the Disturbeds will make it out in one piece, but not so big bands - even ones with recognizable names in the mainstream - will ultimately suffer greatly as they struggle to persist in face of these seemingly insurmountable odds and probably dissolve with no more money left to draw from their coffers.

Carnifex is a pretty big name in the deathcore world whose primary source of revenue, like every band affected by this crisis, is through touring and merch sales. They're the farthest thing from millionaires, but they've probably make enough money off of sales from their last two albums and those previous touring cycles to keep their heads above water for a little while. Now all that leads up to this little song that the band worked on in the interim, aptly titled 'Cursed (Isolation Mix)'. It seems that maybe the California metallers were beginning to feel the squeeze, mayhap the comings on of a sense of stir craziness, and were compelled to do something so they didn't go completely crazy or completely bankrupt at the same time. The parenthesized subtitle may be an indication of how the band felt when they wrote this thing.

The song is more of a continuation of the blackened deathcore style they experimented with on their previous album than the more death metal leanings on their most recent album World War X. While Slow Death wasn't groundbreaking or innovative in the slightest, I think it's at least fair to say trying to meld deathcore with some black metal influences is something that hasn't really been done by too many bands, at least none I can recall off the top of my head. Carnifex dipped a toe in that bloody pool for one album, an album that, to me, was pretty enjoyable, but far from the best thing they've ever done.

I feel like, even though this song is a furtherance of the sound established on Slow Death, it wouldn't fit on that album. There's far too much of a polished nature here and the feelings of claustrophobia and isolation break the tenuous link I thought this song would have to their last album. This song feels like a blood-soaked haunted house, the wooden floors and striped walls splattered red, sharp implements precariously placed in places that suggest everything around is booby trapped, while the keys on the piano on the cover rattle on their own as this incredibly unsettling and unwelcome place becomes even more unsettling and even more unwelcome; whereas on Slow Death, there's more of an occultist, self-harming serial killer vibe going on who maybe worshiped Satan or some other deity of the occult.

There's elements on the last album that the band returns to like pitch shifting vocals, electronic parts, and keyboards that compliment the riffing to build on the atmosphere it creates. Familiar On here, however, there's less emphasis on creating an atmosphere of a mysterious occult nature like on songs such as 'Black Candles Burning'. Instead, the songwriting presents it as a delve into psychosis, hence the jittering electronic beat before the breakdown and the similar continuation of those electronics as Scott Lewis tries to sound as if he's completely deranged, on the verge of totally destroying everything around him, even himself. In my opinion, it works better here than in almost any other instance on Slow Death. I really like the solo that follows it, too, even though it's pretty standard fare for the band. The drums here don't deviate from the established paradigm that Carnifex has laid bare for a while now. He delivers the goods like he has been for years with the band and for what they are, they're passable. Bass is pretty standard, too. Don't really have much to say about it.

Overall, the song is pretty good, a decent counterpoint to the open hostility of World War X. The band delivers again on the atmosphere wholesale. When put into the context of everything that's been happening, I'd say this song carries its own weight and can stand on its own two legs. I can tell that the band really loves this style (this was released three days ago, far less than a year after WWX, bear in mind) because they did it for that album, their most recent EP, and this song, which leads me to believe we might hear this Carnifex-meets-Abigail Williams style more in the future. I'm looking forward to it if more songs they put out sound like this.