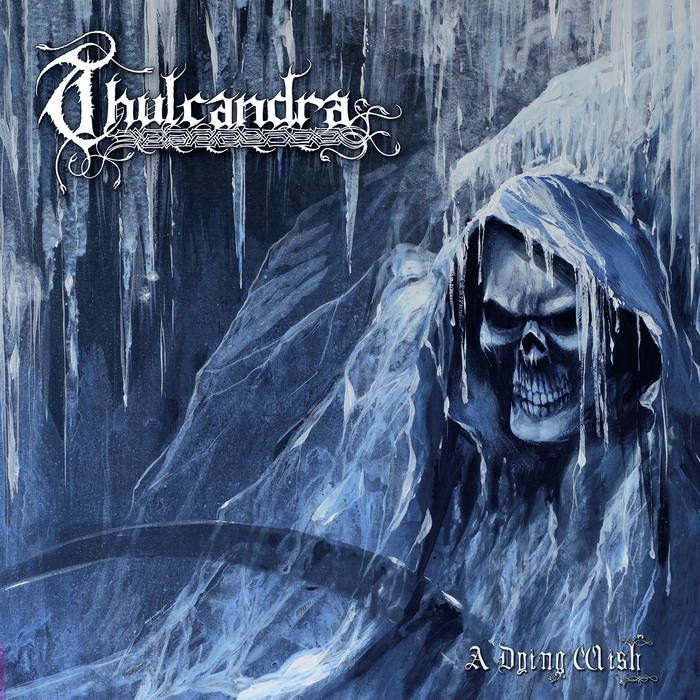 Six long years it took Germans of Thulcandra to record a new album called A Dying Wish. Taking a look at the cover  allows me to see that not much has changed within the last years – all is kept in the same dark, blue and white style as on the three previous albums but this time not their usual painter Kristian "Necrolord" Wåhlin but a German guy named Herbert Lochner created the cover. If you take a closer look at the cover, you will find big differences to the paintings Necrolord did, it is much less detailed and much more superficial. For a guy like me, who likes detailed covers, this is quite a disappointment.

Listening to the first tunes of the album, you immediately get the feeling that Dissection (no, not the uninspired, boring ones who released that "Reinkaos" crap) are back. Okay, Thulcandra always played in the Dissection style but on the predecessor Ascension Lost they somewhat lost their way with playing too many different styles at once and too many unnecessary arrangements were used so that the whole album was quite boring in my humble opinion. Now they got back to old strength – 'The Funeral Pyre' starts with a lot of reminiscences of "Storm Of The Light's Bane". The acoustic guitar sounds quite similar to 'Where Dead Angels Lie' and the rest of the track you all might have heard in some similar way on Dissection's 1995 release. The same goes for the rest of the album. All these melancholic and cold-hearted melodies that once made the Swedes pretty much outstanding in their craft can be found here. 'A Shinig Abyss' is another track where you can find these dramatic and somewhat icy riffs paired with a lot of sadness and gloom and the acoustic part here strengthens this atmosphere greatly but there are many more tracks with a quite similar traits on the album of course. Tracks 4 and 7 are short acoustic intermezzos which bring some variety onto the album. Some really calm stuff here that is not so furious and fast like the rest of tracks.

Of course, the quartet (of which guitarist / vocalist Stefan Kummerer is also in the technical death metal band Obscura) is much too skilled to just play along sheer copycat tracks. You will never find anything on the album that really was played this way by Dissection (yeah, you got me, the live track on the digipak edition 'Night's Blood' is by Dissection of course but that doesn't count…). This for me, is quite an important thing I guess because to create songs that remind you all the time of one of your favorite bands without really quoting them is not so easy and most bands fail to do so.

Nevertheless, the Germans cannot really hide their involvement in other bands – just listen the start of 'The Slivering Silver' where you can clearly hear out some technical death metal riffs Obscura uses to play on their albums. But all in all, these things are just little nuances on the album which you may find out only when you listen to the album several times. I really don't want to tell too much about the tracks themselves - if you like Dissection, just listen to A Dying Wish and form your own opinion. As for me, I don't have a dying wish after listening to the album but I wish to press the repeat button on my stereo!