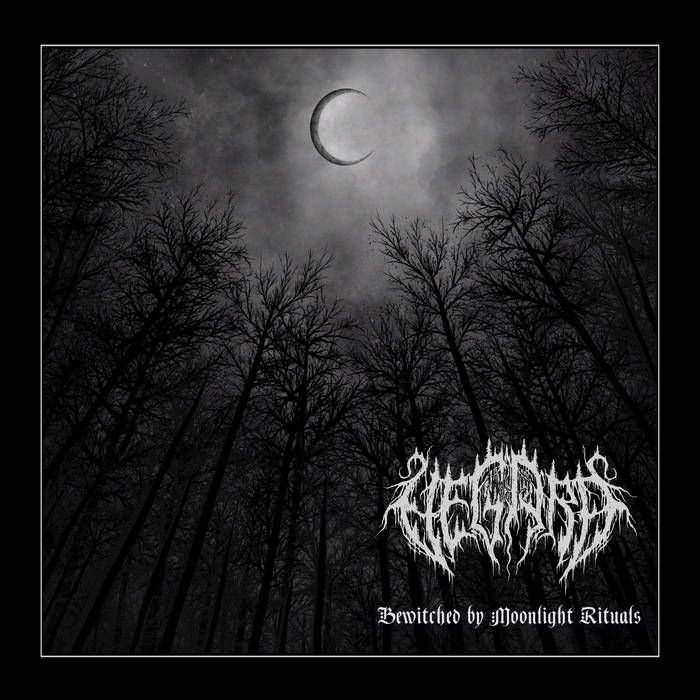 Recently, I went to the Bandcamp of Death Kvlt Productions and decided to make a huge purchase. Since Bandcamp and a bunch of labels (some of which of their own volition, I'm sure) are doing huge discounts on their digital material there, what better time was now than to get some metal? With that in mind, the entire digital discography of DKP was bought for a little over a dollar. All 71 digital releases in my library to do with as I please. Well, with the exception of Lamp Of Murmuur's stuff, but that's more so my issue with the band deciding to be as much of a cunt as possible by only allowing one song to be digitally available on the BC while making infinitely scarce the number of physical copies they make, making their music almost impossible to buy cheap anywhere.

Rant on one band's business practices aside, Vegard. Vegard is an atmospheric black metal band from the UK formed in 2018. From what I've seen, they've been relatively hard working with a handful of demos, a split, an EP, and two full lengths over the course of two years. The two men at the helm of this band, Grond and Count Vornok, it seems want to make a name for themselves in the black metal underground given the amount of material they've pumped out pretty consistently.

The album I decided to give a listen to is their second full-length, Bewitched By Moonlight Rituals. There's an inherent spookiness to this album, a moribund chill that permeates the air when it begins and will linger for a while after the last track concludes. As it progresses, the album slowly pulsates towards an ever-greater encompassing coldness that seeks to swallow the room in a crystalline aura of misty fog, enveloping the listener in its frigid winter grasp that is threatening, yet mysterious and welcoming like the call of a siren. There aren't any fast, sweeping tremolo picks, no insanely fast hyper blasting drums – none of that is present on this album. Instead, we're treated to a slow, pleasurable vibrato of soft as silk keyboards in the forefront, slow paced, meticulous drumming, and incredibly thin guitars with heavy distortion in the background, occasional acoustic guitar parts which serves as the catalyst for a very pleasing atmosphere, topped off with a pretty thin production job, this album is cold, cold, cold to the bone.

Now all of this is typical for atmospheric black metal. Nothing unique is being brought forth to shake up the established formula too much. What this album makes up for in its lack of doing anything out of the ordinary are the great songs it produces. For those who enjoyed the most atmospheric parts of Wolves In The Throne Room, early Burzum, and maybe early Ulver, this is worth checking out. The keyboards really stand out in creating a really vibrant, ominous setting of being lost in the woods. My favorite song so far is 'Summoned To Dusk', which really commands my attention with its beautifully haunting melody and entrancing shrieking vocals performed by Count Vornok whose performance wouldn't be out of place as a terrifying spectre roaming the forest. Again, very typical black metal banshees, but I feel these kinds of screeches work best with atmospheric black metal. The minatory nature of them fits more so here than if they were to be swapped out on a Darkthrone or even a Tsjuder album. These echo laden screeches are more akin to, as I mentioned earlier, Wolves In The Throne Room. The bass on here is nice and audible, which always leads me to give a band extra point. On top of that, it's not stagnant at all behind the guitars and is off doing its own thing. Also beautiful. Some of the most interesting bass lines we hear in songs like the opening track and the last track, 'A Tomb Shrouded In Mists'.

Already throughout the writing of this review, I've gone through this album twice through. That's because not only is this album engaging, but it’s also mesmerizing. It's hypnotic. It's trance like. As this album closes yet again, I have to say that I'm definitely going to check out this band's other stuff. I can't say this album is a masterpiece, but it's immensely entertaining. All atmoblack fans should give this thing a listen.