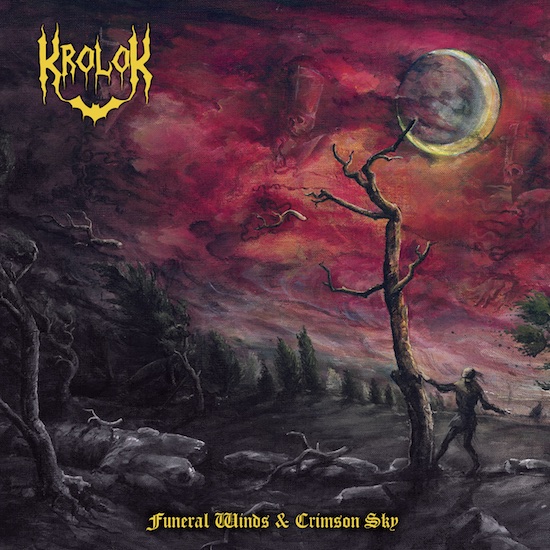 Czechs and Slovaks were compatriots until 1992. When they parted from each other, both sides did not share many tears. Too many national differences had shown up, not least because of a different destiny before and during World War II. It is therefore all the more surprising that Czechs as well as Slovaks have an affinity for a pretty strange form of black metal. Master’s Hammer hover above everything, but Malokarpatan or Krolok also have something to say. (Cult Of Fire and Death Karma impress with their individuality as well, but their kind of blackness points into a slightly different direction.)

So here we have Krolok’s long-player number two, Funeral Winds & Crimson Sky. Its almost magical artwork visualizes the title perfectly and the music also casts a spell over the listener. For those who only feel good if they have a reason to feel bad, I confess that the quasi-instrumental, pretty melodic intermezzo 'Path To The Haunted Ruins' is okay, but not outstanding. Anyway, I do not have more information to feed your hunger for bad mood, because Krolok present a mature black metal output with a very eerie atmosphere. The lead vocals reverberate extremely and give them a nearly supernatural character, the often-used keyboards underline this impression and yet the heaviness of the music does not suffer from these two elements. Despite some theatrical moments, Krolok play nothing else but authentic black metal. They just add a touch of wizardry in form of outstanding melodies, background vocals that seem to have nothing in common with our earthly existence and unexpected twists and turns. It’s not only the title track (simultaneously the closer) that fascinates in view of these details. Already the introduction of 'Black Lore Of The Fens' opens the gates to the weird realm of the Slovaks. But don’t be fooled by the relatively soft beginning – the opener also provides a lot of dark energy. The high-speed drumming is at risk to drown in the eerie, surely not perfectly balanced production. However, this kind of individual black metal only comes into its own with an equally individual sound and it is hard to believe that Funeral Winds & Crimson Sky would reach a higher level of quality with another sound.

The songs deliver drama and tragedy, brutality and harmony. It’s really cool to experience the mix of mid-paced black metal, surprisingly occurring vocal lines and old school riffing in 'Towards The Duskportals'. The band varies the intensity masterly and thus I have the feeling that this song (and the entire album) marks a very late, but also very brightly shining highlight of shitty 2021, the year the virus is still alive. But at least we and the big number of black metal legions are also not dead yet! Therefore, we are able to enjoy comparatively straight, atmospherically dense songs like 'Reptile Abyss Beneath Dowina'. Okay, instead of a reptile, I rather see flying bats before my inner eye when listening to this song. It doesn’t matter. Just make sure that you don’t miss this album. It will not set off an avalanche that results in the re-union of Czechs and Slovaks (I bet a medium high amount on it), but it will make your day if you like slightly dotty yet extremely competently designed black metal.