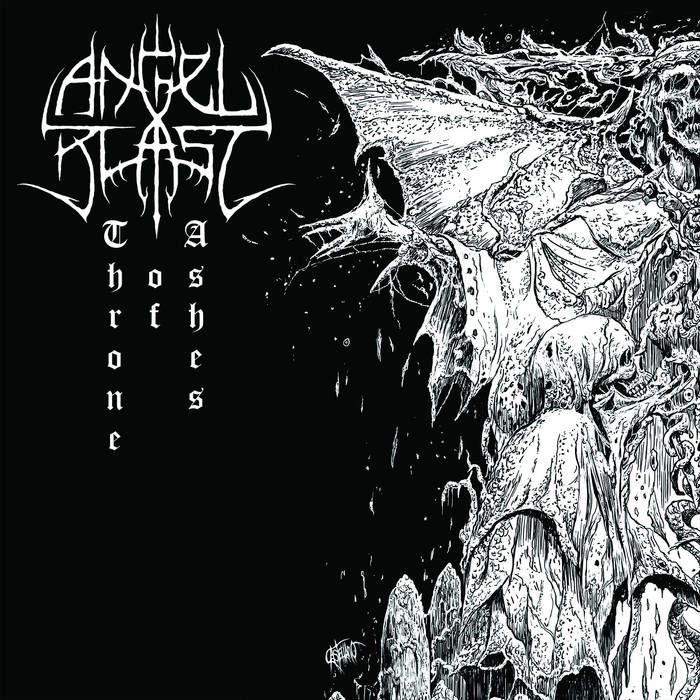 The new year will start with quite a blast, I guess. Edged Circle Productions plans on spewing out a very nice EP called Throne Of Ashes by the international project AngelBlast. I have to confess that I listened to this output before I read any information about this band and stumbled over some influences here and there like Necrophobic or some dark and atmospheric death metal that Hail Of Bullets or Memoriam played / still play. So, it was no surprise to find such illustrious names like Hempa Brynolfsson, Gord Olson (both members in Darkened), Johan Bergebäck (Necrophobic) and Perra Karlsson (In Aeternum, Ex-Destroyer 666) in the line-up.

What the quartet plays on Throne Of Ashes is quite a very fast and melodic mixture of death and black metal. The first track which is also the title track is a very fine 6-minute inferno which overwhelms the listener after a short calm and gloomy intro. Swedish styled black death fury at its finest – the guitars sound sharp like a blade and Gord Olson screams out his lungs. I hadn't expected such a casual black metal performance by him when you know his voice in Darkened. The track also sometimes reminds me of old Dark Funeral but these guys put so many influences into it and it is so incredibly varied that (at least for me) it's a very short six minute trip.

The other track on the EP is called 'Tartarus' and this is literally a hellish trip. This one starts even faster than the first song and leaves almost no room to breathe. You can hear brutal black and death metal riffs everywhere, sometimes interrupted by some breaks which take out the awesome tempo of the track only for a few seconds and the guitar solos remind me of Possessed or Slayer. Perra Karlsson beats the shit out of his drums as if it was his worst enemy and you can clearly hear on these two tracks that we don't have any newcomers here but some proven musicians who know what they want: destroy!

I hope that AngelBlast won't take too long to record a regular album because this EP is really killer and makes you hungry for more!