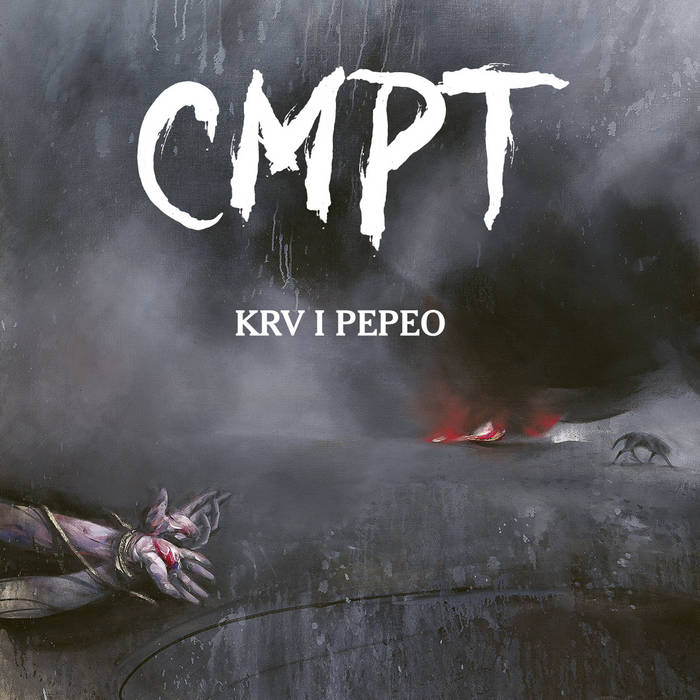 First of all, let me start with a meterological finding. This new force from Serbia has chosen the right season for the release of its full-length. Krv I Pepeo spreads dark December / January vibes. (Okay, if I look out of the window, I see only rain, no snow. But this will quickly change, I am sure.) Its songs are simply constructed and either you feel the effect of its smoothly flowing lines or you don’t. In other word: if you are interested in things like rocket science, you rather will not see a sense in listening to this debut. But I am no scientist and so I enjoy many parts of the output.

In alignment with the mystic concept of the band which understands the album as a homage to the spiritual tradition of its home regions, CMPT try to create a magical, eerie aura. To achieve this goal, the Serbs (or is it just one dude from Serbia?) use the tools from the box which once was designed in Norway. Quite icy leads ('Srce Od Trnja'), meditative lines ('Memla'), desperate vocals ('Seme Ponoci') and some keyboards effects (in the closer) appear. No doubt, the classics from the cold North have found their way to the centre of former Yugoslavia. There is more than a grain of Burzum in the songs, but early Emperor have although left their mark. Some songs reflect their impetuous recklessness with a high level of play at the same time. And it almost goes without saying that Darkthrone’s early works minus “Soulside Journey” were influential for the artists as well. So there is no innovative stuff to find here – but, much more important, more than a handful of very solidly, sometimes really excitingly arranged songs.

It’s still raining outside, but CMPT gives me some acoustic ice crystals. At first, I thought it’s a rather mediocre pleasure to inhale the album, but it grows on me. The dynamic opener wins through its rapid tempo changes, while the guitar lines of the title track have an almost theatrical note. 'Prokletije' offers nearly dreamy lines, but unfortunately the rather lame rhythms and the somewhat predictable pattern leave room for optimization. Not all that glitters is gold, but CMPT are like a football team that returns with a glorious victory after a previously weak game. The quasi-instrumental 'Vrani Pir' is absolutely thrilling. It comes directly to the point, does not lack velocity (to say the least) and sounds like a vehement and sustainable wake-up call after the mediocre number before.

CMPT find a good balance between furious sequences and some atmospheric details which can often be found between two songs, not only after the fantastic 'Mesečev Zub' with its great, surprising melody line during the instrumental part. Okay, I cannot really grasp the concept of the album, but this is probably only because I do not understand more than three words of the entire lyrics. Apart from my linguistic poverty, I like the sound of Krv I Pepeo, because it is well placed between overly raw underground stuff and polished documents of sterility. The production gives the whole album a dark touch and of course this is what I expect when it comes to black metal. By the way, it has also become dark outside. It's strange that you can't see the white snowflakes. But wait – despite the cold atmosphere that CMPT create, it doesn’t snow outside. It’s still raining. Yet this is not to say that their debut fails to have an impact. It’s not outstanding, but resilient, robust and honest. Check it out, the Serbian scene deserves more attention and support.