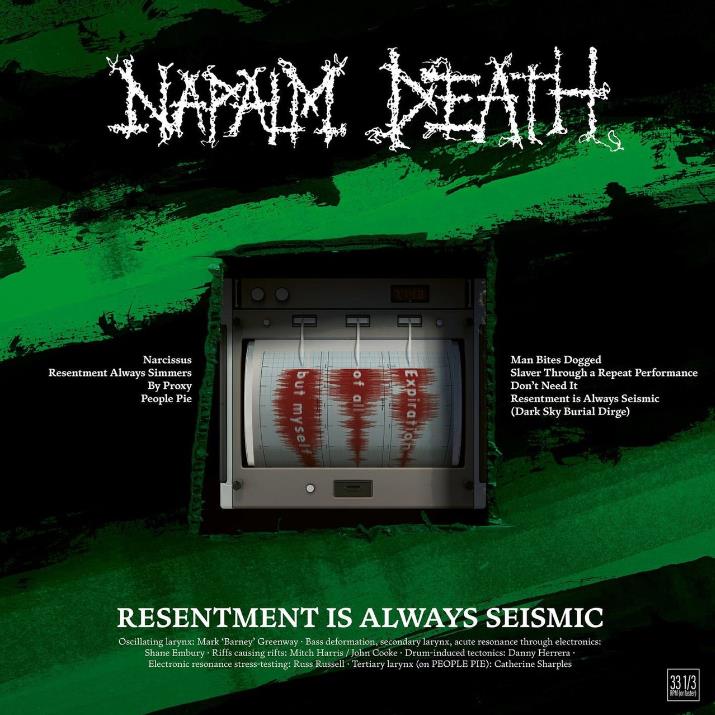 This EP is composed of 6 new original songs and 2 covers. What I liked the most about the originals is that they combine the heaviness of the groovy 90s Napalm Death with the full speed grindcore onslaught of their first records, without falling into the clichés of either. 29 minutes is a fairly long run for an EP, it feels like a pretty complete record overall. There are some ambient passages that resemble Godflesh because of their industrial influence, especially on track 2 'Resentment Always Simmers' but the covers feature some of that as well. 'People Pie', originally written by Slab! is technically funk, the bass is so downtuned and distorted it sounds like it's being slapped.

In terms of production I noticed that the drums aren’t too loud and that helps the strings to stand out a lot more with all those dynamics. The album sounds very organic, despite the enormous amount of effects used on the strings, even the weird ambient noises sound like they were produced by actual instruments. I love how they managed to combine the punky riffing and guitar tone, ultra solid and consistent with the overly distorted bass. Generally it’s the other way round, ultra thin and acidic guitars and a clean bass that sounds almost acoustic. They perfectly managed to turn around that mixing tendency.

In the vocal department we have Barney Greenway’s traditional high-pitched yells but there are also a lot of low-ranged choirs done in clean vocals, like some sort of Gregorian Chant. The drumming is precisely what you can expect from Danny Herrera, completely methodic, not one single stroke is out of place or missing. Experimental passages on Resentment Is Always Siesmic - A Final Throw Of Throes are so rough that the intensity of the regular blastbeat riddled sections is kept throughout the whole album. Mid paced sections are also heavy as fuck, in that sense I think this EP is more direct than its predecessor Throes Of Joy In The Jaws Of Defeatism. I loved that full lenght too, but I have to admit it was a pleasant surprise finding out that Napalm Death can still manage to release this ravenous level of grindcore.