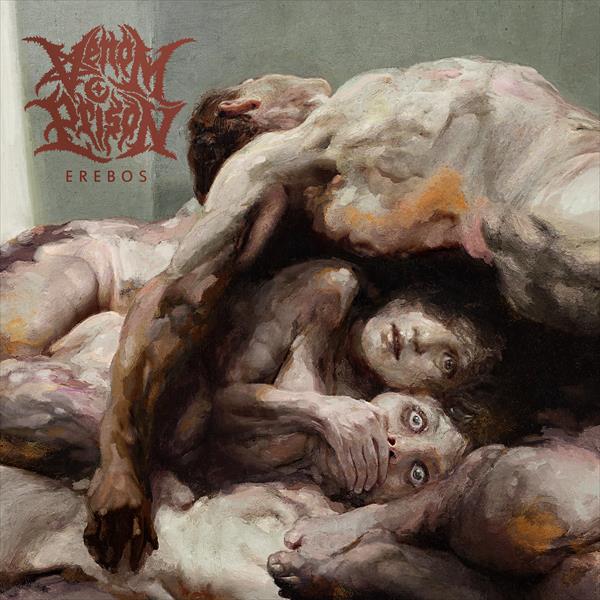 Venom Prison is a truly interesting band that I’ve been loosely following since 2019. If you look them up, they are generally classified as a death metal band mixed with hardcore, which fits them well but can be misleading. Normally, you see death metal and hardcore and you automatically think, ok. So basically, is it a deathcore band then? But no, it is definitely not deathcore! Their sound is much closer to straight death metal, but with a big emphasis on the politically charged lyrics and no, it isn’t grindcore either. So, Erebos is the band’s fourth album and first album on a big label, Century Media Records. For their first album in the big leagues, they greatly expanded their sound while still fitting in the death metal/hardcore box. It’s just that, now, the box is much much larger.

First of all, let’s quickly talk about the line up. It remained the same since the first release, except for newcomer Joe Bills on drums. Completing the line up is Ash Gray and Ben Thomas on guitars, Mike Jefferies on bass and the star, for me at least, Larissa Stupar providing vocals and lyrics. The vocals are the first thing you notice on this record. Larissa is one of the best modern death metal vocalists out there. Her range has definitely expanded on Erebos. She still mainly uses her traditional shouted growls which are still completely devastating and fit the lyrics so well, but sometimes she adds deeper, guttural growls, high pitched screams and even some soft, ethereal cleans. All that makes for a varied and never boring experience.

Speaking of varied and never boring, I think it’s a very apt description of the entire album, for the vocals as much as the music. You can take random bits of the album and convince anybody It’s anything, from a melodeath record, to deathcore, to techdeath or straight up old school death metal. All of that is perfectly blended and does not feel like a compilation of different styles, but a completely cohesive experience. For example, on 'Judges Of The Underworld', it starts as a straight forward death metal song with hint of hardcore, but then evolves, slowing down, incorporating quiet cleans and ending with furious breakdowns. 'Nemesis' has a truly bouncy, headbanging riff with the line: "I am the damaged one, you deserve all damage done", repeated over and over. Guaranteed to be stuck in your head! But then, the song slows down into a calm and spacey part and goes straight back into heavy territory. One of the most unique songs on the album, and all of Venom Prison’s discography to be honest, is 'Pain Of Oizys'. Starting with a moody, ambient, electronic passage completed with piano and clean vocals. It then slowly builds up with bluesy guitars and ends with a heavier sounding part. 'Comfort Of Complicity' is also very interesting. Sounding almost like At The Gates in the beginning, but with blast beats and breakdowns sprinkled tastefully here and there. Around the midway of the song, it shifts to this positive, almost upbeat melody. It’s kind of weird, but it totally works. The last song I’ll talk about is the album closer, 'Technologies Of Death'. This song showcases everything the band has to offer: headbanging riffs, traditional death metal tremolo picking, quieter, melodic and emotional riffs, blazing and technical solos, high pitched screams and heavy, low growls. Plus, it ends with melodic and epic sounding strings, closing the album perfectly.

Another essential part of this album are the lyrics. It’s a rare occurrence, in the world of death metal at least, to have the lyrical content so intertwined with the music. I mean, you could just listen to the music and still have a wonderful experience, but it would not be complete. The music makes more sense with the lyrics. I might be a bit biased because I’ve always gravitated around a militant environment, so the political and sociological themes tackled on Erebos really spoke to me. Larissa talks about big issues, such as; victim blaming: “Victimised. Oppressed. Criminalized. When society chooses to be selectively blind, Trapped in a cycle of a manic mind hypnosis, Schizophrenia. Misdiagnosis. Trapped in a cycle of a manic mind hypnosis, Who is to blame? The crimes contested”. She also describes the more general state of society: “Bear witness, To the great divide of humanity, Fuelled by illiteracy and stupidity”. Larissa truly shows what a talented artist she is.

So, to conclude, Erebos is truly an amazing experience. The band realized their full potential as songwriters and found their sound. I think I heard somewhere that Erebos is the band’s "Heartwork". It’s a great comparison and just like Carcass, I hope they continue to perfect this sound for many many years, but hopefully with less of a big gap in between albums!