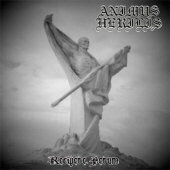 Raw aggression, strong vocals of hell, dark as Satan's heart and evil... that to me, defines Black Metal. I do not mind the Symphonic BM and its power that is the normal in this genre today - but when BM is striped down to the core and played with the rawness of old school, there is even a more malevolence and power that comes through. I see a movement towards the older Black metal, and it seems to be taking root.

Animus Herilis was a French based band that played some of the nastiest Black Metal I have heard. Sounding even more raw than Hellhammer demos before Tom Warrior and company changed to classic extreme band Celtic Frost, Animus Herilis take it truly old school and deliver. With a conscious eye on using a very rough style for recording - a way that accents the stripped down, heavy and caustic music perfectly and the fact that they sing all of it in French just adds another dimension of evilness.

Just listening to tracks like the simplified evil of 'Mortifer Signum' or the balls out darkened glee of 'Requiem' the purity of the old school BM shines through and proves why this genre is so strong and alive even today, while some revert to their loathsome roots and reduce the music back it to the very core.

Animus Herilis sadly had disbanded sometime in ‘08, and some of them went back to the band Sovereign. Black Metal needs more bands like these guys, as they were one of the bands in the late 2000's that were starting to embrace the diabolic nature that came with stripping down of the music did. Fans of BM should try and find this album for their collection but I think that this album is worthy for any Banger to own. It might be hard to locate but it is worth it.